In the 2000's, Saskatoon's Factor produced tens of albums. This was his merit, but also his flaw. Sometimes, the Canadian beatmaker seemed to prefer quantity over quality. He built lots of new loops and new beats, but he didn't necessarily take the time to fine-tune them as much as the talented rappers he was working with deserved it. Red All Over, though, one of the four albums he released in 2005, was different. On many tracks, Factor was transfigured. This time, he did much better than delivering beats per pound to his collaborator. 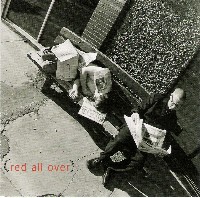 One significant part of the album's success was due to his other protagonist. Based on the few pictures showing his face – a quite banal one, with a Ramones-like haircut – Nolto didn't seem much. He was neither a star emcee, nor a word genius, nor a master in free-styling, story-telling, or hidden meanings. Characterized by frequent moves from rapping to singing, his style seemed as bland as Factor's. Inspired by his ordinary life, this poor wretch's lyrics were focused on his casual love affairs, his home city of Saskatoon, or his life as a regular worker. However, Nolto biographic stories often sounded just accurate and relevant. And the best tracks were precisely those where he was rapping alone. Factor only had to add his own touch to make these convincing.

And he did so. What he never really offered to MCs from abroad, he delivered to Nolto, and to this concept album presented like a newspaper, with each song being a different news column. If the first tracks were pleasant, the next were even better, starting with the fifth: "Business", indeed, was the humorous story about a chick and his loutish boyfriend, and it benefited from some indolent beat and a "Penny Lane"-like hook. "Religion" with its organ and Nolto falling in love with his guardian angel was at least as good. And "Help Wanted", about the commercialization of society, was supported by a perfect guitar sample.

And that was not all. The album also had some happy ("Wedding Announcements") or unhappy ("Personal Ads") love songs, and another about death ("Obituaries"). Supported by soso on "Lifestyle / Entertainment", the rapper also philosophized about alcohol or cinema escape strategies. All of these were successful tracks, showing Factor's progression, and his definitive move from lifeless beats to outstandingly astute and catchy ones.