Some doubts had remained, after listening to From Filthy Tongue of Gods & Griots (2002), Dälek's previous album. It had been a bit too uneven, and it relied too much on easy tricks like noises, walls of sound and crescendos, to make an impact. Despite some true gems, for example "Spiritual Healing" and "Classical Homicide", it didn't get all the benefits from the very personal kind of dystopic rap invented by the Newark duo. Two years later, though, the next album, Absence, would confirm for good that Dälek was a great hip-hop group. 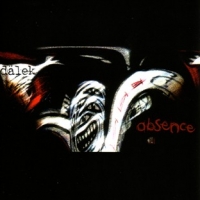 It was still the same music, a metronomic deluge of weighty sounds, drums without mercy, and deafening basses. The raps were still slow, implacable, and uncompromising. And sometimes they stopped, so that we could be immersed into Oktopus' soundscapes and the screams he got from his machines. The formula was easily recognized, starting with its very first beats and lyrics. However, this third album from Dälek – notwithstanding their collaboration with kraut rock's veterans Faust – was the opposite of the previous one. Monolithic, heavy, without any rock-like anthem à la "Forever Close My Eyes", it maintained nonetheless the same level of intensity, from the beginning to the end.

Even more than the previous albums, Absence was hard and raw. The sounds were less diverse, and it lacked the complexity of Derbe Respect, Alder. The rhythm, more particularly, was always the same. The music was austere and monochrome, it never differed from the kind of rap, heavily influenced by indus rock, or by the likes of My Bloody Valentine - the similarity with the shoegaze group was striking on "Ever Somber" – that made the specificity of the duo, and legitimated their presence on Mike Patton's label, Ipecac Recordings.

A banal mix of political defiance and pessimistic assessment about the current state of hip-hop, the lyrics were not always sensational. Except maybe with the anti-religious "Opiate the Masses", it was not so far from the boring sermonizing of conscious rap. However, because it was more uniformly dark than any other Dälek release, Absence was fascinating. With its pressure never loosening, and listened on a powerful hi-fi system, instead of just headphones, this record gave a perfect idea of the traumatizing experience their concerts could be. Dälek's recipe sounded sometimes formulaic, or even too easy. But it worked on this album, the duo's best, until they released an even better Abandoned Language.