That was some concept album. For their first joint record, indeed, Mcenroe, John Smith and DJ Hunnicut opted for a school metaphor, giving to each of this long album's songs the name of a specific lesson, like "Philosophy", "Social Studies", "Geography", "Français", "Physics" or others. They complied with this principle all along the record, and never were off-topic, except maybe with the bonus track, where they admitting dedicating some time to "Extracurricular Activities". 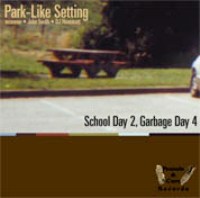 But behind the concept, this was Peanuts & Corn at its purest. All these courses names, in fact, were a pretext to review with distance and humor some of the label's favorite topics. There was a deep dive into introspection with the two "Personal Developments" tracks, some attacks against the music industry and the current state of hip-hop ("Music Appreciation" and its memorable "I didn't buy a walkman to listen to your talking, 'cause I didn't buy your tape at all"), some political comments, for example through a critic of escapism ("Astronomy") and the disillusioned report of a class representative election ("Political Science").

The production was another proof of P&C's excellence in those years, thanks to subtle and meticulous beats made of round and warm basses, various drums, and delicate jazz samples. Again, Mcenroe was delivering a fantastic piece of work, demonstrating his taste for details and ingenious ruptures. This was clost to East Coast boom bap, but it was personal, and it sounded both new and timeless, especially with apexes like the indolent "Political Science", the magnificently langourous "Information Technology", and the extraordinary "Geography", "Physics" and "Extracurricular Activities". Its length (23 tracks and more than 70 minutes) and the absence of true bangers were the only reasons why School Day 2, Garbage Day 4 sounded sometimes a bit dull, as compared with other Peanuts & Corn records - that is to say, the best of the indie rap scene, in those days.