Coming from Aurora, not too far from Chicago, Marco Jacobo explored a similar style as Galapagos4's beatmakers. His first album, actually, was similar to Meaty Ogre's Leo Vs. Pisces. In both cases, it was some well crafted work based on samples, alternating rapped songs with instrumental tracks. Both men knew each other well, actually, since they had recorded jointly another record, Meet your Maker Vol. 1. And Birthwrite Records, Pugslee Atomz's label, where the producer would release Honestly, was somehow a twin to Galapagos4. However, thanks to his outstanding finesse, Maker was surpassing all other beatmakers on this scene. 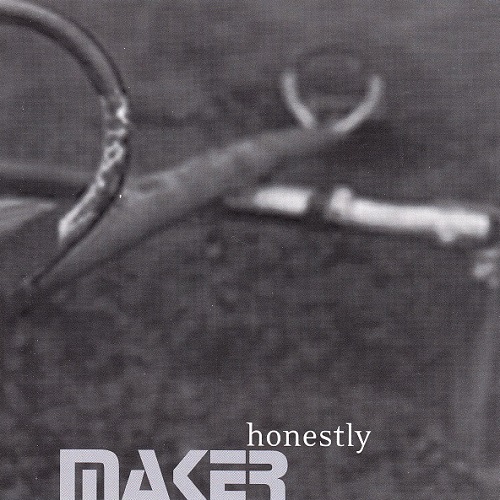 One of the key differences with Meaty Ogre, was that Maker had sought his guest rappers much further than in Illinois. Of course, there were some key players of the local underground scene on his record, like the Nacrobats, Lord 360 from Slaughterhouse V, Thawfor, and a Qwel at his very best. Both Maker and he would inaugurate their rich and long-standing collaboration on the eponymous track, "Honestly", where a sarcastic Qwel would recycle the lyrics of Nirvana's "In Bloom". But there were some other guests, coming from elsewhere, like the turntablist DJ DQ, and the rapper Adeem, from the Dorian Three, with whom Maker would found the excellent Glue trio. And also, a handful of Canadians, like Sarcazm, Josh Martinez and Governor Bolts, who were rapping on "Uphill Climb", a track no less than excellent with its fabulous piano and its furtive banjo.

Maker's strength, actually, was his attention for astute details. It was also his sounds, more powerful and haunted than any from the Meaty Ogre and others; more melodic and organic, too, like with the funky "Jumpin Lilly". Those beats worked well when rappers were speaking over them, for example Costume on the very strong "Intended For". But those with no lyrics were sometimes even more powerful. Those were the long, suave and languid instrumental tracks on the record, like "Dead of Winter", "Tomorrow by the Ocean", "How about This', "Call Center Anthem", "Lost at Last", all magnificent, and "Enter the Mind", with its fantastic scratches, bass, piano and gushing chorus. All announced, in the best possible way, the advent of a real musician, a true hip-hop composer.