The name Latyrx (say it la-tir-iks), mixed those of two rappers, Lateef and Lyrics Born, both core members of the Solesides label, along with Blackalicious and DJ Shadow, all later known as the Quannum collective. By the 90's, each of these people, jointly or separately, had delivered masterpieces of the Bay Area indie hip-hop world, like the Melodica EP, or the much more famous Endtroducing…. And for Latyrx, the key release had been an album soberly titled… The Album. 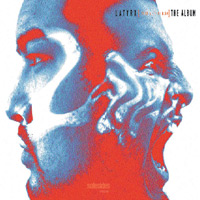 Lateef the Truth Speaker had been the first to make a name for himself beyond the Bay Area when, after a first single, "The Wreckoning", he had released the fantastic "The Quickening (The Wreckoning Part II)", by 1996. Brilliantly produced by DJ Shadow, who had enriched the raps with a bitter guitar and a few piano chords, this track had been praised by both Musik, a British magazine dedicated to electronic music, and core hip-hop publications like The Source and Rap Pages.

As for Lyrics Born - formerly known as Asia Born - he had released the very first Solesides single, "Send Them", as soon as 1993. He had then reappeared in 1996 with "Balcony Beach", which had been a quiet, smooth and nice track, where the rapper gave the feeling he had smoked too many blunts, and was seconded with the sweet voice of Joyo Velarde, a Filipino singer he would later on marry with.

In between, both rappers had began to collaborate with each other, starting with "Latyrx", the B-side of "The Quickening". On this song, produced once again by DJ Shadow, Lateef and Lyrics Born were rapping simultaneously, declaiming different lyrics, in stereo, so that you could hear a different song, depending on which side of the headphone you were listening to. And even when using both, this was still a great track. It proved how complementary the rappers were, Lateef opting for a neat and dry kind of flow, while Lyrics Born's was more suave and nonchalant.

There resided The Album's best value. Though, as a compilation of both rappers' previous work (i.e. all the singles mentioned above), it was a bit too heterogeneous, it had some key strengths: its very bold kind of beats, for sure – all produced by DJ Shadow, Blackalicious' Chief Xcel, or Lyrics Born himself – some being particularly surprising, like the electronic experimentations of "Say What" or the discotheque oriented "Muzzaper's Mix", a track full of big basses, with a catchy rhythm and some "woo woos"; but also, even more than these, the great skills and verbal agility of the rappers, both absolutely great, both clearly outstanding.