Based in Clifton, New Jersey, Joe Rath is said to have recorded something like ten albums around 2000. Most of them, however, have been released in a very DIY way, except He Meant Well, a 2002 record released on Motion Recordings, but almost as unnoticed as the others. It was only with Overwhelmed - a 2003 EP proposed by Beyond Space Entertainment - that the rapper started making a name for himself. All songs on this record did not all have the same value, but the catchy "Marilyn’s Diary" and the dark beauty of "Parliament Lights", about a suicidal girlfriend, were full of potential. And one year later, this potential was confirmed with Don’t Be a Martyr, a full album were almost all tracks were strong. 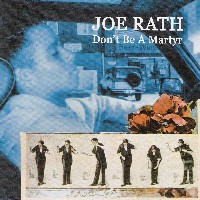 The music of Joe Rath had nothing to do with boom bap, and with the sound of the nearby New-York City. With its sensible emceeing, its guitar beats, and its singer-songwriter kind of hip-hop, it was, on the opposite, the culmination of folk rap. As a matter of fact, Poor Richard, the most pop / rock oriented collaborator of the rapper, was producing all the music. And it was a good thing. Thanks to him, the album was constant and homogeneous. It was also full with good ideas, the first of them being to start with "The Bads Outweigh the Goods" and its perfect guitar, bells and piano loop, the most appealing track of the record.

The most appealing, indeed, but not necessarily the best; "Black Prince Distillery", "Caught with Mina Loy", "Especially an Oath" and "Morning Gutter Birds" were other marvels, with their stories of abandon, tragic loves and miserable lives. These were all black gems, strengthened with acoustic guitars, or gently electric ones, with organ, piano or synthesizer sounds in addition, all underlining lyrics full of irremediable pessimism and misanthropy, as with "Morning Gutter Birds":

It's the cruelty that makes the man, and of course, it's not soothing to shake a hand, there's sweat and there's residue, uneasiness that presses you

However, as the title hinted – originally a sentence his mother kept on saying to Joe Rath – the record was not only about defeatism. The rapper, sometimes, raised his head, he even invited people to action on the last two tracks, "Lost Appeal" and "And I’m Spent" arguably the album's best songs, because of their lyrics, as well as their music. It was not longer this failed alliance of rap and pop / rock, which was a problem on Overwhelmed. It was no longer some awkward crossover experience. Don’t Be a Martyr was no less than one of the most accomplished version of a genre of its own, underground guitar rap for introverts.