In 2001, after his two EP's, Music for tu Madre (1998) and A Bottle of Whup Ass (2000), both praised in the underground, Jay Mumford, a.k.a. the producer and rapper J-Zone, had finally released his first real album. This third record was, somehow, the synthesis of the two others. It was recycling some of their songs. Also, still assisted with the rappers Huggy Bear and Al-Shid, J-Zone was pursuing with this disagreeable and lustful dilettante of a character he loved to play. 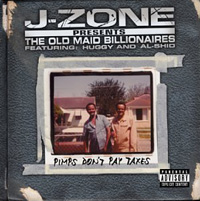 Each of J-Zone's tracks looked like some humorous sketch, including the skits the album was full of. Each, also, was fully aimed at showing the amorality and vices of his persona. As soon as with "Q&A", a false interview, J-Zone declared that he cared more about his sexual activity than about his musical career. Later on, on this record, he would prove it, with a colorful mix of misogyny and self-mockery.

On "You Block, You Bleed", for example, he complained about a stupid hip-hop fan – also a beatboxing practitioner – who was spoiling his attempt to date some girl. On "The Trojan War", he claimed that he despised condoms. Later on, with "Old Maid Legal Aid", J-Zone was realizing that he had just made love with a minor, and started panicking about the legal consequences. And on "No Consequence", he and Huggy Bear ware raving about an imaginary day, when they could do whatever they wanted to, with a guarantee that there would be no consequence.

Thanks to his smart, devious and unapologetic lyrics, J-Zone was constantly funny. Also, he was an astute producer, with his own tricks and sounds, like all these beats full with a funfair atmosphere and retro feeling, and samples from ancient instruments like street organs, accordions or bittersweet violins. Also, he had no equal for delivering charming and catchy melodies, all totally contrary to the very dark and funcrusher ambiance of the underground rap scene of these days.

Because of this, because of his humor, happy sounds and politically incorrect lyrics, completely opposite to all these songs against bling-bling or gangsta rappers, hip-hop's underground was so fond of, J-Zone has never really been able to capitalize on his generally positive reviews. His career has been a half-failure, he would recognize in Root for the Villain, a book he published in 2011, and which, ironically, would be exactly as clever and tasty as his first real album.