Music is only a matter of alchemy. And this alchemy, this delicate balance, few approached it as closely as Adeem, Maker and DJ DQ, a.k.a. Glue, one of the most solid and constant groups ever engendered in hip-hop's underground. As soon as at its beginning, with the excellent Seconds Away, Glue was this perfect rap trinity that, when perfectly aligned, a MC, a producer and a DJ can be. 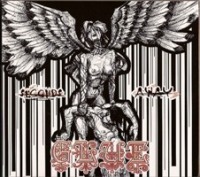 Adeem, of the Dorian Three, made a name for himself when he won at the Scribble Jam – and he did it twice. With this album, however, he didn't sound too much as a battle rapper. While moving from a live to a recording experience, and despite a few more joyful tracks, like the Honda Civic dedicated "Jump in Lilly", he got more introspective, or even depressive ("Winners never Sleep"). Though he was voluble, and his flow was malleable – refer to his fast delivery on "Elbow Room" -, this mic virtuoso could also explore quieter styles, in a spoken word way, or even get silent, and just give way to the beats, like with the beginning and the end of "Lullaby for the Sun", the instrumental "Land in the Sea", the guitar and rolling drums of "1970", or the Schubert-sampling "Plays her Piano".

The music deserved these pauses, since it was produced by one of Chicago's finest beatmakers. As usual, Maker preferred subtlety to uproar, attention to details to grandstanding. So that he underlines the melancholic mood of Adeem, he produced graceful and magnificent instrumentals flirting with trip-hop, like with the introduction of "Lullaby for the Sun" or, in a less accomplished way, with "Mixing Excuses". This did not revolutionize hip-hop, but it expanded its musical territory with unusual samples, like the spinning organs of "Goodbye", or the sitars of the prodigious "Haunt". Maker also excelled in guitar rap with "Fighting Ends", and he could be bold, sometimes, as with "No Helping", or the 3 phases, all outstanding, of the memorable "Winners never Sleep". DJ DQ, on his side, delivered dynamic and entertaining scratches, as with "Country Funk".

None of these was a novelty in hip-hop. But in the extended indie rap family, Glue was positioned in the best possible way: though they were obvious heirs of the boom bap era, they didn't try to copy the music of this bygone age; they could be quite adventurous, at times, but this was not their main selling point. All three guys were just driven by the need to build good albums, not just manifestos. This is why Seconds Away, despite some uninspired tracks like "John Kimball", is so perennial and enduring a piece of work. This is why it is so long in the mouth, and why, for years, we never got bored with listening to it.