According to his press kit, Existereo was influenced by the likes of Hank Williams III, Black Sabbath and Gram Parsons, in addition to some rappers. This sounded just ridiculous, these people covering genres as diverse as country, metal or hip-hop. And though, it was credible, to whoever was familiar with this rapper - and graffiti artist. His records, indeed, were all incredibly eclectic, even for a member of the Shape Shifters, starting with his first album, Dirty Deeds & Dead Flowers. 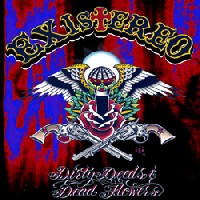 This record from the only slim member of the Shape Shifters, indeed, had a strong heavy metal imaging, with its title derived from AC/DC's Dirty Deeds Done Dirt Cheap and its cover art full of guns and roses. Also, the tattooed rapper started – and finished – the album with the first words of Paul McCartney's "Live and Let Die", before engaging into some indescribable sound maelstrom. Later on, among some solid raps, Existereo would propose some nonchalant jazz duo ("Duck Feathers"), and close it with duck quacks. He would also invite some Portuguese speaker ("Get that Freak off"), or go country (then end of "Sometimes Before").

These were 75 long, crazy, inconsistent and frustrating minutes, but with many great tracks: "Rhymetime", a true banger; the above mentioned "Get that Freak off"; the cleverly scratched "Sometimes Before" with Inna Space, Existereo's brother, and his partner in crime with the WhyKnows; "Cut me Gently" with Die Young; the grandiloquent but convincing "Subconscious Carnaval", etc. And of course, we should not omit the main dish, "Four Day Window Pain", a track with four movements, produced by Daddy Kev, a particularly inspired and bold beatmaker, since his experiments with free jazz and the Slanguage album.

The album, also, was full of guests: some Shape Shifters core or affiliated members first, of course, like Awol One, 2Mex, Die and Liferexall, but also some other key players on the Californian underground rap scene, like Darkleaf, Busdriver, Tommy V and Gel Rock of EX2. All along this record, it would burst out.

This album was, according to Existereo, a memorial to his youth. The rapper, however, would never cease to display a juvenile energy. His next albums, like the great Crush Groove, or the Mixed Drinks Vol. 1 record he would release on a Russian label, or his duos with Metfly (Overfiends) and Oldominion's Barfly (Candy's 22), would all be made of the same ecstatic and youthful mess.