Making one's best so that hip-hop looks like a live experience, strengthening raps with the sounds of "real" instruments, has not always been a successful approach. The most famous group which tried to go this way, The Roots, has sometimes failed at it, coming dangerously close to boredom. And when a rapper proves to be good at this, it is more often in concerts than on records. Toolshed, though, a group from London, Ontario, used this formula fantastically on their second album, a record blended with bouncing guitar, drums, bass and saxophone sounds, reinforced with facetious and dynamic raps, and full of rhythm and scratches. 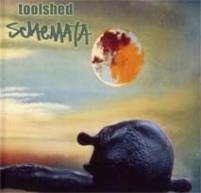 As usual with such a formula, there was some kind of jazz feeling on the record. Instead of polished saxophones and clean basses, though, Toolshed preferred a more radical and free-form sound, directly influenced by the West Coast Underground scene and the Californian indie rap. Timbuktu (raps, production), Choke and Psyborg (raps), Fat Mike (DJ), Danny Miles (drums), Andrew McCormick (bass), and Alex Margison (saxophone) – and the relentless mcenroe, who took care of the mastering – opted for organized disorder. And, as if this was enough to deliver a good record, it all worked very well.

20 tracks long, Schemata was full of ingenious, quick and attractive rap songs, constantly reinvented and boosted with new rhythms and atmospheres. Among them, let's mention "Out of Rope" with its saxophone and its catchy hook, "Age In", featuring Thesis Sahib and a memorable bass, the fabulous "Art Imitates", where a jazz instrumental was followed by another, much different, a bit dreamy, and the very final tracks, "Unified Identity" and "Fear Less".

A few slump tracks, the absence of obvious bangers, and of course the live sounding approach, did not make of Schemata a fashionable album. This record had too many handicaps to really emerge from the Canadian rap underground. Indeed, Toolshed would stay one of indie rap's best secrets, a group not many would hear of, even among the die-hard rap fans. This did not prevent its members, though, to deliver a few more albums similar to this hidden treasure.