In 2004, along with a collection of poems, Pigeon John released the South Bay Blues EP. This had been the best and most personal record ever delivered by this LA Symphony ex-member, also a Good Life Café regular. It was 8 tracks long only, but each of them was no less than exceptional. They were worth "What is Love?!" and "Emily", the best songs on Pigeon John is Dating your Sister, the rapper's previous album. This EP, however, had not been advertised enough to find its public, and it was more easily available as illegal MP3s than as a regular record. Eventually, we had to wait for a new album, Pigeon John Sings the Blues - the last the mixed-race rapper released on Basement Records before he joined Quannum Projects - to finally get hold of these 8 marvels, but in a new version. 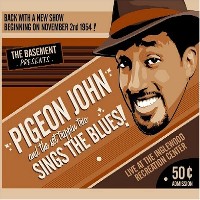 So, Pigeon John sang the blues. Such said the deliciously retro cover art of the record. He talked about some serious matters, also, like the multiple forms of love ("Nothing Without You"), the insignificance of human beings ("Matter 101"), and all the rest, but with a large dose of light-hearted humor, as on his previous albums. So was it on "She Cooks Me Oatmeal", when a bashful lover finally revealed trivial motivations: "You cook me oatmeal, you make me breakfast, and I miss you, 'cause I'm hungry". Or on "Upside Down Rotten", where, a penitent party-animal, he admitted not having cured all of his previous vices: "I used to drink Bacardi and go to strip clubs (pause), and I still want to go to strip clubs".

Successively, Pigeon John joked, or he confessed himself. While doing this, he didn't hesitate to go through unusual ways, alternatively rapping and singing, so seamlessly that one couldn't tell when he moved from one register to another. All titles were eminently playful or melodic, and he didn't hesitate to use an acoustic guitar or even the strings of a waltz on the classy "The Grand Oli Waltz". Pigeon John diverted rap, he made it his thing. And, as he mentioned on "Matter 101" ("I don't care if the hip hop heads turn away and say Pigeon John has turned gay"), he mocked the potential reactions and consequences to this.

Well, not so sure that Pigeon John really mocked them, since he didn't rereleased South Bay Blues as sober as it originally was. He remixed it, he enriched it with additional instrumentations and new tracks. These additions, however, were either superfluous, or unfortunate. "You Can't Have It", for example, was augmented with an unnecessary and irritating drum. And some tracks from the previous album ("Emily", "Identity Crisis", and a "Life Goes On" supported by Abstract Rude) were badly mistreated by unimaginative remixes.

The brand new tracks, though, were good. So was "Sleeping Giants" with Eligh and The Grouch, from the Living Legends, a song about the downfalls of the race to success. So were "Rainy Day" and "Draw Me Closer" as well, with their crepuscular atmosphere. It was just bad luck that such tracks didn't fit with the others. They were from another genre, another color, and they spoiled the original freshness of South Bay Blues. With such a strong basis, however, Pigeon John Sings the Blues could have been nothing else than a very good album.