This was Clothes Horse's second life. After it released the very special records of its founding members, the Saskatoon label had taken care of Canadian rap's lost legends. It started in 2004, with Recyclone, whose first records have been rereleased, and who made a new album with soso. And in 2006, it was the turn of Thesis Sahib, the prolific rapper, the designer of cover arts for the likes of Alias, Deeskee, Bleubird and Buck 65, the author of many records, in solo, or with Bending Mouth, the Imaginary Friends or Les Swashbuckeling Napoleons. 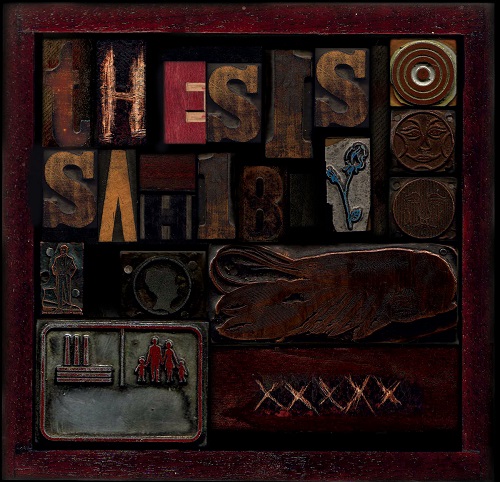 After he released records with Motion Recording, Cease and Desist, Germany's Subversiv*Rec and France's (vulgar), the rapper from London, Ontario, finally joined soso's label to finalize Loved Ones, his 4th solo album, produced by Nyles of HOWL, another group of his. What was striking with it, was his constant progression toward pop formulas, toward some middle ground where many other indie rappers were evolving these days. Loved Ones, indeed, completed an evolution started on The Secret Adventures of Thesis Sahib and Friends, Sahib's first album, and the more recent War Time Theme Songs for the Modern Ego.

"Dengue", the first track, set the tune with its bombastic rock guitars, a flow full with alliterations, and abstract poetry in the purest indie rap style. The same kind of collision striked again later, with other guitars ("Eavesdrops") or some new wave sounding beats ("Action Man"). All along, similarities with other emancipated MCs were noticed. Here, "With What We Have" sounded like some Buck 65 in his darkest mood. There, "On the Road to Rotting" was reminiscent of Pigeon John's sing-song, though a bit quicker. And "Near the Low Stream" looked like Ceschi's hip-hop revision of the most melancholic 60's pop.

James "Thesis" Kirkpatrick proposed a different game on each track. And those were many; 30, for a total length of 34 minutes, which means that, if you know your math, each song lasted approximately one minute. The album was full of bangers, like with the jingling "Mud Pies", the robotic "On the Road to Rotting", the electronic "Stuffed as a Champion", the strange complaint of "The King’s Men", or the reggae "Crawling on your Needs". And though, all of these ended just after they started, not allowing attraction to give way to pleasure.

And this was Loved Ones' only default. If Thesis Sahib would have given time for these songs to grow, he would have released the best indie rap album of 2006. This record, however, was only made of a potential masterpiece's snippets.