Stimulated by the rise of a new generation of creative artists, the old underground from the late 90's is currently looking like it is back from the dead. In 2012, several of its key players - El-P, Bigg Jus, Brother Ali, I Self Devine, Busdriver, Dose One, Radioinactive, and even Mhz - released an album sometimes after long years of silence. The most relevant of all, though, may very well be Aesop Rock. 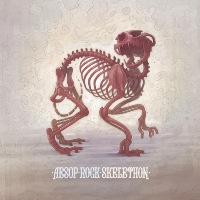 Don't expect from Ian Bavitz, now that he is heading toward his forties, to be keeping with his times. He is still proposing, more or less, the same formula as in 2000, in the heyday of the indie rap era. But his new album looks like the very best of these times. Aesop Rock, actually, is still the grandmaster of intellectual, obtuse and complex lyrics. Even native English speakers are struggling with them, sometimes. The rapper is still keen on telling bizarre stories like, for example, when he talks about a baby fallen into a swimming pool while his parents were celebrating Independence Day, and miraculously saved by his dog (WTF???).

In addition, as many others on Rhymesayers – a label he joined after the end of Def Jux – Aesop Rock is of the introspective type: he revels in confessions, self-criticism ("Gopher Guts"), and black thoughts. The morbid allure of Skelethon, and its sinister stories like "Crows 1" and "Crows 2", are unequivocal. This rapper was depressed when he recorded this album. He was, actually, still shocked by his recent divorce and the death of his friend Camu Tao. His experience with the music industry left nothing but bitterness ("Zero Dark Thirty"). And he is tempted by seclusion and a regression to his teenage life ("ZZZ Top"). But a bit of humor and cheerfulness remains when, for example, he reminisces about his childhood distaste for vegetables ("Grace"), or his Mhz dead friend ("Racing Stripes").

The beats also sound as if they were 10 or 15 years old, Aesop Rock opting for broken and somber sounds, loud drums, rock guitars ("ZZZ Top", the excellent "Cycles to Gehenna", "1,000 O'Clock", "Grace" and others), IDM experimentalism, and other improbable noises ("Saturn Missiles"). All of this is not too far from the production style of the rapper's previous label boss, El-P. Ironically, though, Aes' music has never been stronger than today, now that he makes his own beats.

Blockhead indeed, whose style was sometimes a bit too linear, is now out of the radar screen: Aesop Rock produced all tracks. Except for the contributions of Rob Sonic and Kimya Dawson, he is its only architect and player. As a result, his solo rides are the album's only weakness. Coupled with his tough and aggressive sounds, his trademark flow is properly oppressing and exhausting. And though, as for many other solitary works, this is one of the rapper's most accomplished.