The endless bursts of a machine gun. The horrific screams of a panicking women. Crescendos built with the help of booming synthesizers. Martial choruses. All of these played very loudly. And also, most importantly, the raspy and enraged voice of Gunplay himself, rapping in a breathless way, as if today was his last day. Those who assumed that nothing could be more extreme than the brutal Inglorious Bastard, he released in 2011, were completely wrong. The song "Jump Out" is insane, it is just utter madness. It goes beyond anything heard before. 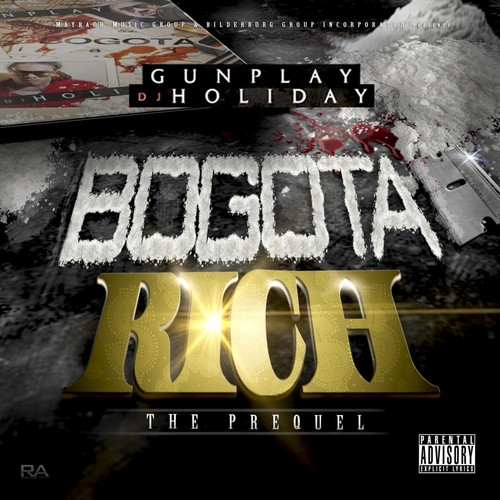 And the most remarkable, is that other songs on Bogota Rich have exactly the same impact. Such is the case with "M1", a track named after a gun and which, indeed, is as powerful as a bullet in your belly. Likewise with the arrogant "Fuck Shit in My Life", and the conclusive "God Damn". And it is the same again with the thunderous "Low Life". There, with some support from his Triple C pals, Gunplay claims that he is lowlife, precisely; a rogue, a brute, a modern times heathen.

Such seems to be his main objective in life, his purpose, and his esthetic manifesto: erasing definitively finesse and subtlety. It is obvious with the visuals, and with these cover arts where, after having played with the Nazi imagery, Gunplay displays mountains of cocaine. This is also true with his music: it is showy, warlike, and spluttering, with its bells and synthesizers. Last but not least, he has a virile flow grasping people by their throats. It is so fascinating that only one thing matters with his songs: the time when he starts controlling the mic.

And though, this is just a minor release, a prequel of the album to come. "It's just an appetizer", says Gunplay in the intro. Really? If so, if this frantic project full of testosterone is a foretaste, what will the final product be like? We can't wait, we need to know what Medellin, to be released by Def Jam in 2013, will sound like.