In 2003, Eligh Nachowitz was not a newcomer. Any fan willing to explore deeper than hip-hop's most obvious faces already knew his remarkable As They Pass (1996) and Gas Dreams (1999) albums. This time, however, the rapper was ready to reach the upper level. Thanks to his group's – the Living Legends – growing reputation; thanks, also, to Poltergeist, a consistent, haunted, and poetic record, stronger than his previous releases. 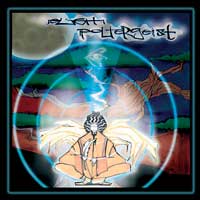 The key formula hadn't changed much. A man of many talents, Eligh was taking care of everything on the album, as usual. The lyrics, the beats, and the cover art – rather ugly, as always – were all his work. His sharp and particularly quick flow, dominated the record, except on the few occasions when others were supporting the rapper: some Living Legends fellows like Bicasso, Murs, The Grouch, PSC or Sunspot Jonz, another key player of California's underground, Abstract Rude, and the guy's own mother, Jo Wilkinson.

There was something more, though. From the smooth "Pattern Traps" to the fast "3 Minute Rip Down", with its electronic nuances, sophisticated beats, and delicate tracks, Poltergeist had a larger breadth and variety than its predecessors. Marked by Eligh's addictions to drugs and alcohol, this was also a dark and gloomy record, which also benefited from the additional musicality of some guitars, played by Robert Miranda and John O'Kennedy.

Sometimes, Eligh was dropping hits, like with "Ancient Grandfather", the melodic "The Mountain", and the well-named "Funk". But he was also able to play with emotions, with deep and quiet tracks like "M.I.C.helle", "To Angela The Last Love Song", "Meditation", or "A Poet Sits". Thanks to these, Poltergeist looked like the rapper's masterpiece, his opus magnus. His next release, however, Enigma, would be even better. It would take Eligh's formula to its logical conclusion, providing a richer kind of hip-hop, an even more mystical and musical one, just before serious drug issues spoiled the guy's creativity for a few years.