So many years later, the bizarre and indigestible Pyramidi is just a distant memory, some remainder of the early 2000's and the short-lived abstract hip-hop era represented by labels such as Mush and Anticon. And though, and though… it aged much better that so many other records released by the same time by similar minded artists. 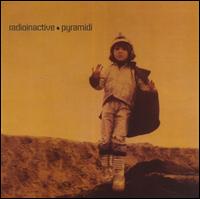 This is an old hook that Sun Ra was using in the past, to invite us to a long and intergalactic musical trip. In 2001, Radioinactive appropriated these sentences on "Launch Padlock Smithereen", a track from the Ropeladder 12 compilation, that he also recycled to open his Pyramidi album, as if he wanted to demonstrate his likeness to the most fanciful of all jazzmen, posing himself as his heir, with this long sample of weird and free hip-hop.

For many, however, this record was indigestible. No surprise, considering the content: no less than 30 tracks; some incomprehensible gibberish lyrics declaimed at full speed with a crazy flow, talking about anything, the human condition, Pumas stolen from a thug, or some oriental topics inspired by Radio's Egyptian origin; samples coming from any form or genre of world music; radio programs excerpts, animal shouts, and other nonsensical bits. Of course, this was too much for a normally constituted human; much too much.

Years later, Pyramidi could have been just a remainder of the abstract rap area represented by Anticon, a record exaggeratedly praised by the small indie rap audience, too impatient to discover the first true solo album from an ex-Log Cabin and Westcoast Workforce, too willing to confirm that Mush was the label of its time, just after the release of Ropeladder 12, Aesop Rock's Float, and Dose One and Boom Bip's Circle. However, much more than the above-mentioned records, Pyramidi still makes it. The two thirds of it that, yesterday, looked like unnecessary fillers and sheer lunacy, are even great fun nowadays.

By the time the record was released, DJ Orgasmic, a future member of French rap group TTC, prophesized that people would love this album in the future. Well, the guys of TTC have never been known for being particularly visionary. And the reality is that nobody cares today about Pyramidi. It is never too late, though, to appreciate this album of Radioinactive as it deserves to be, and to realize that it was already as engaging as his next albums to come.