1999 was a year full of expectations, as far as the Arsonists' first album was concerned. Having become underground icons after a series of singles released on Fondle'em and Serchlite, their growing reputation had allowed them to join Matador. This rock label, at this time, was interested in the indie rap scene, having also signed Non Phixion. And it offered to the group formerly known as the Bushwick Bomb Squad, and affiliated to the famed Rock Steady Crew, a unique way to reach an extended audience with its incandescent kind of rap. 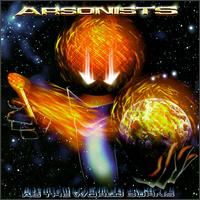 The group, though, partly failed to seize the opportunity. The singles and b-sides that had built its fame – the funny "Session", the disturbing "Seed", the prodigious "Blaze" and "Venom" – were all present, and still beyond reproach. And some new tracks, like "Worlds Collide", the marvelously languid "Live to Tell", and the white-hot "Halloween" and "In your Town", proved that Q-Unique, D-Stroy, Freestyle, Swel Boogie and Jise One's energy levels were still up.

More than ever, the group was restoring the freshness and playfulness of old school hip-hop. The reference to past times was explicit on "Rhyme Time Travel", where Q-Unique was rapping according to the styles of various times: disco rhythm and quick flow for 1979, Eric B & Rakim imitation for 1988, minimalist and ambient rap for 1999. This was a bit conceptual, for sure, but enjoyable.

But there were some drawbacks. This veneration of the past would make them, at times, despite their status in New-York's underground, a bit too conventional. And sometimes, their taste for humor and light things made them inconsistent, like with the circus music of "Pyromaniax", a song that is funny only once.

Last but not least, the album was lacking unity. Its first tracks, the incisive but expected "Backdraft", and then the superfluous "Shit ain't Sweet", were a bit dull. And afterwards, many fillers populated the record again. As the World Burns was not as great as the singles that made the Arsonists' reputation, nor did it translate well the energy of the group during live shows. Irregular and patchy, it shone for one reason only: the fact that it compiled in one unique place all the great releases the quintet had seeded over the previous years.