Contrary to what his experimentalist posture suggests, Thavius Beck's music has sometimes been too easy. The ex producer of Global Phlowtations, one of its few members who met some kind of critical recognition in the 2000's, thanks to his releases with Mush Records, Plug Research and Big Dada, sometimes spoiled his music with too many effects and pyrotechnics, and with some big, threatening electronic sounds, sounding like an exaggeratedly gothic version of hip-hop. Many times, though, the individual proved that he was really gifted and talented. 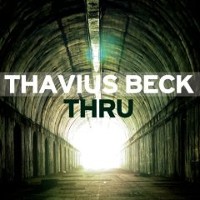 More than with Decomposition (2004), his first album for Mush, more than with Zwarte Achtergrond (2005), he delivered as part of the Lab Waste duo, and which provided us with some kind of hip-hop version of Trent Reznor's music (whom Thavius Beck occasionally collaborated with), the beatmaker delivered his best works with the very good International Beats (2005), a CD-R he recorded under his old moniker, Adlib, and then with his second official solo album, Thru (2006).

The excessive cold of Decomposition was still there. It dominated the album, starting with the introductive "Sonic Sound", its garish electronic sounds and its dark background voices, and then continuing with tracks obviously made to impress, such as "Reaching", the grandiloquent "The Storm Before The Calm" – not the worst track, though – or the foul "Perpetual Pursuit", which looked like a soundtrack for Scooby Doo. The other tracks, however, were more delicate, less clumsy, for example "Under Pressure", or "Down", the most sophisticated part of the album, a quasi-instrumental song where Mia Doi Todd's sweet and eerie voice was strangely distorted, and complemented with the sounds of breaking glasses.

When he didn't deliver pure instrumentals, or grap the mic himself, Thavius Beck was supported by other MCs on tracks which, overall, were all convincing, reminding people that he was first of all a rap producer, someone whose music is at its best when dressed with lyrics. "Dedicated To Difficulty", for example, was not only a great Adlib track, it was also one of 2Mex's best since a long time, despite its much too long hook. The verdict was the same for "98" and its piano, with Nocando sharing some thoughts about his father's death, and for "Lyrical Gunplay" with slam poet Saul Williams. Thanks to these tracks, and despite a few weaknesses, Thru may have been the best among Adlib's easiest to find records.