Released in 2003, Talkin' Honky Blues was Buck 65's second album for Warner, and the first to really sound like a major label record. It was the first, also, to be thoroughly advertised. There, Buck 65 completed his evolution toward pop and rock sounds, and was marketed this way: as the rapper who had turned his back to the music of his youth, in favor of another genre he had felt in love with. The campaign had been so well organized that, until today, many still mention this album as the Canadian's very best. But this is false. It was, indeed, one of his weakest. 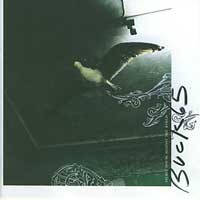 In these days, disappointed fans were considered as narrow-minded purists, who couldn't stand the treason of a rapper who used to be viscerally attached to rap and its authenticity, a guy who used to belong to Africa Bambaataa’s Zulu Nation, promulgated the 10 commandments of hip-hop on his radio show, and named his own label Four Ways to Rock, according to the 4 elements. Their real problem, though, was different. It was that Talkin' Honky Blues was really feeble. The fact that Buck 65 finally decided to abandon hip-hop was not the issue, since the following album, though still very rock sounding, would be no less than excellent.

Secret House against the World was not only Buck 65's second pop / rock album, it was also his Parisian one. The rapper, who had relocated to Paris, had included some French verses to his record, sung by him or others. And Serge Gainsbourg's influence was obvious, especially with the album's use of majestic strings. The album didn't differ too much from the previous one, though, except that it corrected its flaws and removed its ugliest parts, like the repulsive harpsichord or guitar solos. And Buck 65's flow sounded less monotonous. He even sang, sometimes. And his lyrics, as usual, demonstrated his outstanding mastery of storytelling.

Now, supported by John McEntire, John Herdorn and Douglas McCombs from Tortoise, and also another Canadian Francophile, Gonzales, he fully mastered his new format. There were still some hip-hop reminiscences, like scratches from D-Styles, but our genial jack of all trades would also go country ("Rough House Blues"), or reinvent himself as a Franglish speaking Captain Beefhart ("Le 65isme"). Using the right instruments (guitars, pedal steel, strings), he would excel in telling stories about lost people. He would also move us with the very nice "Devil’s Eyes", "Surender To Strangeness", "Corrugated Tin Façade", "Blood of a Young Wolf", "The Suffering Machine", and above all "The Floor", a song about a battered woman, with a piano à la Erik Satie and an inspired finale full of strings and banjo; superb.