Fondle'em's merit, but also, its mistake, is to have preferred the EP format to any other. For that reason, in a world that still considers LPs as the ultimate masterpiece for music, the legacy of New-York's indie rap scene founding label is not as big as it deserves. Most of its artists, the Cenobites, the Juggaknots or the Arsonists, finally had to transform anthology singles or EPs into real albums, adding to them some demos, freestyles, rarities or new tracks. For some of them, this extension of their previous records was a success, as is the case with the Juggaknots' Re:Release. But for some others, the final output was a bit frustrating and unbalanced, as with The Visualz Anthology, a compilation of Siah and Yeshua's work, released in 2008. 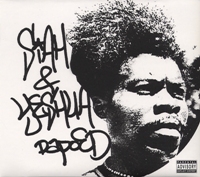 Originally, in 1996, The Visualz was just an EP, with six tracks only. And four of them, those on the A-side, were close to perfection, though their main goal seemed more to maintain alive NY's fading jazz rap tradition, than to be revolutionary.

Produced by Siah and Yeshua, with some help from a friend, Jon Adler, the beats were as smooth as possible, thanks to agile pianos, saxophones, basses, hi-hats and organs. They were also full of swing and spiced up with DJ Bless' scratches, like with the admirable "No Soles Dopest Opus". With their supple raps, both MCs displayed their skills and poetry, bordering the abstract and the esoteric, like with "Gravity". They explored their artsy side even further on the B-side, with "A Day Like Any Other", a track more than 11 minutes long, whose beats changed with the narratives. On this song, also, they no longer assaulted wack MCs, but reminisced about children literature, alluding to Narnia, The Wizard of Oz, or the likes.

The original record, released on wax only, was excellent. To change it into a compact disk, though, 14 additional tracks had been added, and not all are as powerful. Some were successes, like "Pyrite", a solo from Siah which could have found its place on The Low End Theory, or "Transatlantic", a joint effort with UK's The Unsung Heroes, or the aerial "Hairy Bird Reprise" and "Untitled". But some other songs were less memorable. They were unimaginative, or even boring. And the radio freestyles were primarily some kind of archive, historical documents.

But so was the objective of the extended version of the Visualz: it was supposed to be a documentary, enriched with pictures, articles and a few words from Bobbito Garcia. It was a testimony, about a duo that dropped from the radar screen, and split much too early to deliver anything else beyond this essential record.