Now located in Fort Wayne, Indiana, but of Australian origin, Stephen Eric Bryden, a.k.a. Sankofa, started his career by the second half of the 1990's, as a member of the Society of NIMH, along with Spon, JON?DOE and Kashal-Tee. He released some strong records, like the White Collar Criminals's Invest Mentality, and his first solo album, Obese America (2002). Since then, he kept on releasing solid records, including the recent Just Might Be (2013). As part of our indie rap series, he accepted to talk about his past and background, and to share his views about the late 90's underground hip-hop scene or the rap music of today. 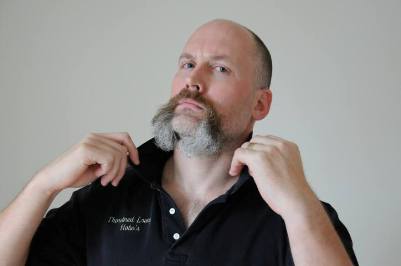 The "indie rap series" is a cycle of interviews organized with some key activists of the late 90's / early 2000's independent rap scene in North America or beyond. Some of them are almost famous, some others less known or forgotten artists. These interviews will help documenting a book, written in French and dedicated to the same scene, and published in 2014, in the same collection as Rap, Hip-Hop''.

What is your perception of the indie rap scene that emerged in North America by the end of the 90's, with labels such as Fondle'em, Rawkus, Stones Throw, Rhymesayers, or later Def Jux, Anticon, and so many others?

It was a time when the floodgates unleashed the potential of what could be. It was an exciting time before everything became sped up to the time it took to type 140 characters and mixtapes still meant something. Streaming audio was a chance to hear something, but you still needed to know someone who knew someone to get that Ras Kass Soul on Ice Demo on 20th generation dubbed tape or Funcrusher Plus. Disenfranchised lovers of hip-hop realized they didn't have to wait around and/or seek approval from traditional media outlets (in this case, major labels) in order to have an impact with their music. There was a thirst for an alternative to that which was being spread by said media outlets and recording gear was gradually getting more affordable. Cats raised on quality rap started getting serious about their own craft and role in the bigger picture.

Where would you put the limits of this movement, in time, place, or styles?

Hmmm. It was limited to who wanted to be down. It seemed to grow so fast - I mean, Scribble Jam getting Scion underwrites and all that. I think once it started getting big enough that people who were in it to get dibs on being first moved on to whatever was about ready to be cool.

What is left today of this scene or movement, according to you?

Not much. I mean, some have managed to do well. Murs seems to have a lot of business sense, even if his records didn't quite sell what would be considered strong numbers. Mac Lethal went from releasing a half-assed album via a since defunct hip hop website to getting a real handle on how to present himself in a manner where people do the heavy lifting for him and spread the message. I can't pretend I know what's going on in everyone's ledger, but that's my general outlook. Some cats have been wise.

It feels like majors realized they needed to adjust their methods and thus came the astroturfing. Call it conspiracy theory, but I don't think someone wasn't pushing Soulja Boy behind the scenes to make his ascension seem organic. The majority of people/fans/consumers are jaded enough that they won't listen to someone telling them something is great, but if you leave enough breadcrumbs, they'll think they made the bread and revel in the exclusivity of their discovery.

This is a very jaded take, but I've always been fascinated in what motivates people. The only thing cooler than saying "Did you see this farting cat rap video" is responding with indifference and snidely touting the next disposable item in this endless cycle. To get someone's attention is something, but to hold it is an entirely different creature.

Talking about Soulja Boy - whatever the role major companies may have played behind the curtains to make his success possible - don't you think that he really represents a major shift in hip-hop - more dance oriented, more focused on style or swag than on lyrical skills - which has an interest in its own? Isn't there a real and deep trend behind this, which is bigger than the hype?

Hip-hop started as a dance-oriented artform, it wasn’t exactly breaking lyrical miracle ground. I remember, a few years ago, going back and listening to Salt-n-Pepa’s "Push It" and realizing there were only about 8 bars of rapping in that song. Swag or style is a lot simpler to market than "this will make you think." There’s a point where lyrical complexity becomes self-serving and unlistenable. The art is in weaving words and making it fun to bump. Honestly, for as much time as I’ve spent working on lyrics, I tend not to listen to them when the radio’s on. As for a real and deep trend, it’s the desire to distract people (not just rap fans) with mindlessness.

What is your personal story with indie rap?

Released a tape (Jonah's Saucony EP) back in '98? First song I recorded ("Emasculation" w/ Kashal-Tee) was the highest selling piece of vinyl in Sweden for a three month span - it was pretty much all downhill from there. Well, Kno (then DJ Kno) of Cunninlynguists asked me to drop a verse for "616 Rewind" and that's probably the song I'm most known for. As is often the case, I consider it to be one of my more cringe-inducing verses, but those are the breaks. I'm thankful he asked me to be on the track. See, he and Cunninlynguists were smart in growing their brand. I remember back at a Scribble Jam, talking with Sage Francis and he realized I wasn't making music with the thought of earning enough to live on. His words were "Oh, so you're not trying to make it." To me, I was more interested in enjoying the process of making music rather than risk becoming disenfranchised trying to sell myself a certain way.

I've never been comfortable talking about myself, be it in rap or other fields. I would rather people talk to me as a person rather than approach me with their preconceived notion of what a rapper is/does. Take the director for the "21 Choices" video - great/talented guy, but he would pepper our conversations with random rap slang. Don't get me wrong, I use terms like "dope" and "fresh", but that's about it. I approach my role in rap as a spy-people learn I rap after knowing me for quite some time and it's a discovery they make on their own. I'm not ashamed of being a rapper, but people tend to be a lot more forthcoming without such contextual framework. If someone can walk away thinking they don't know what pigeonhole fits, then score.

Would you consider yourself as part of this movement?

What would be your indie rap albums top 5 or 10?

Funcrusher Plus, Adru The Misphit's tape he sent me - horrible sound quality but pure rawness - that was back in '96 he sent that. Inside the tape case was a foil Wrigley's wrapper packed with weed. Illogic's Unforeseen Shadows - I think that's the one I got on tape where the J-Card ink ran, dude must have printed it at home. Ras Kass' Soul on Ice demo - he performed at a show JON?DOE promoted and I about lost my voice screaming "JACK FROST" at him his whole set. That was just when "H20 Proof" had dropped as a single. Atmosphere's Overcast, lived on that when I was working graveyard shift in Minnesota to save up money for a move out to California.

What would be your indie rap tracks top 5 or 10?

Insert pretty much any Godfather Don track here. Dude was ridiculous. Throw in the Adru track where he says something about the Human Torch snorting lines of gunpowder. Hell, I'll go for that Wake Up Show tape where Em was in a cipher and Kashal-Tee's "Blood, Sweat, and Beers". Call me biased, but JON?DOE's "Trucker Clock" knocks.

What would be your indie rap artists top 5 or 10?

Overall, do you think that such a category, indie rap, was or is relevant?

It was relevant to the market. It's like trying to explain something to someone who is unfamiliar-a context is needed: "Oh, Sankofa sounds like Chali 2na and Aesop Rock with a sober MF Doom and Sage Francis".

Apart from this indie rap subgenre, what would be your diagnosis on the state of hip-hop nowadays?

It's everywhere, Black Sheep is on Target and car commercials. My only hope is that Dres and Mr. Lawnge are seeing some fraction of that money. The state of hip-hop is there are the cats who truly care about the potential and staying true to its origins (for a local example, The Tomahawk Chapter of the United Zulu Nation right in Fort Wayne), then there are those who see it as a marketing tool. Dr. Dre doesn't even need to release music - he puts his name on a pair of overpriced headphones and uses the proceeds to buy more human growth hormone.

What do you find appealing in today's rap?

Nothing. The more I participated, the less I listened. At first, it was because I didn't like getting compared to other rappers and wanted to make sure I didn't inadvertently make them influences, then later it was based on confusion/bitterness of why other cats were being successful-getting reviews, flown over to wherever to rock shows, etc. - when I considered the music made by my friends and I to be just as good if not better. At this point, I'd rather listen to the music that inspired me back in my impressionable days ('87-'99) and sports radio than hear another half assed garbage darling.

You made a difference between old mixtapes which really meant something, and the mixtapes of today - mostly free albums uploaded on the Internet. Don't you think, though, that the principle stays more or less the same? That, in some way, the indie rap scene, its mixtapes, its amateurism, and its specialized webzines was a blueprint of the hip-hop of today, where the most significant things take place on the Internet?

The principle is similar, but to me, a key difference is the sheer volume of music available. Add to that the increased commercial appeal of rap plus the ease of recording and distributing music and what you now have is a section of people who dabble in it without dedicating the time to hone their craft. Studio time? We’ve got an app for that (insert sarcasm here). For every Chunky A, you now have hundreds (if not possibly thousands) of that "Gucci Gucci" chick and her ironic Pitchfork ilk. Now the power shifts to the gatekeepers-people sifting through the muck to find and share the valuables. Binary tastemaking.

As for the most significant things in hip-hop taking place on the web, I see that hip-hop is just an example of the world at large, becoming increasingly fixated on what is inside its phones.

Coming back to you, what are you doing these days? What are your projects and activities?

I just released my last album, Just Might Be. 300 CDs with lyric sheets, artist photo and shouts-all the stuff I loved as a fan. If I could read the lyrics when bumping the tape/CD, I felt even more connected to the music. Throw in a photo of the artist and it's like my listening to the album let me become part of that world. I've been rapping for 15 years and fatherhood is infinitely more important (not to mention time and energy-consuming) than me expressing my worldview over dope beats or eviscerating some imaginary foe (insert anonymous wack rapper here) with militant fervor.

Below, the video for "21 Choices", a track from Sankofa's newest album.