Though all Living Legends records have not always been flawless, the solo career of Eligh was, for a long time, nothing less than exemplary. Starting in the second half of the 1990's with good albums like As They Pass and Gas Dream, it reached its apex in the 2000's with some gems, first Poltergeist, and then the much original Enigma. After this peak, however, the rapper and beatmaker didn't provide anything substantial for us to enjoy. The reason, as we would learn in 2010 with the Grey Crow album, was due to a serious drug addiction. 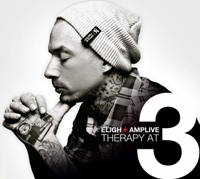 And now, Eligh's best years are behind him. Despite rather positive reviews, Grey Crow was a disappointment, as well as On Sacred Ground, a record he released in 2009 with his mother, Jo Wilkinson, a folk singer who mixed with Pete Seeger in his time. Consequently, nothing was expected from Therapy at 3, an album he recorded with a less talented beatmaker than him, Amp Live of Zion I, and which title seemed to say that Eligh would talk about his drug issues again, in a grim way. This release, though, proved to be a delighting surprise.

We know it since the drum'n'bass experiments of Zion I around the year 2000: Amp Live has always given an ear to England's post-rave music scene. This was confirmed, 10 years later, with the electronic sound of this record, starting with the solid "First Contact", which suited perfectly well the characteristically fast flow of Eligh. It was the same eerie atmosphere, the same breathing music, which made a success of Enigma, cleverly enriched with more organic sounds - the pianos of "Guides" and "Stop Running" - and convincing crossover tracks – the indie pop hooks of "Ms. Meteor", with Steve Knight of Flipsyde, "Ego Killer", with Inspired Flight, and "Beautiful Addiction" with Blake Hazard.

With such music, Eligh was delivering an alternative form of rap, of course, full of deep thoughts and introspection. He philosophized, he postured himself as an existentialist ("Guides"), he fought against his inner demons (see the traumatic "Stethoscope", with Basik, and the absolutely splendid "Stop Running"). He was also rapping about his various addictions on two twin tracks, the dark ones on the harsh "Devil's Medicine", and the positive one, women, on the more light-hearted "Beautiful Addiction". Last but not least, he was exploring remedies to his pains, art, music ("Metronome") and, surprisingly… tattoos ("Tattoo Song").

So that the contemplative atmosphere of the record does not anaesthetize people, Eligh and Amp Live also invited some guests on the most banging tracks: Zumbi and The Grouch, both from their respective groups, Zion I and The Living Legends, on the single "Destination Unknown"; Grieves of Rhymesayers on the above mentioned "Beautiful Addiction", and Busdriver on the average "L.A. Dreamers". Most, of course, were key players of the West Coast Underground hip-hop, a scene to which Eligh was offering its best 2011 album.