By the early 2000's, nobody cared any longer about drum'n'bass. After a few years, in the previous decade, when this genre - born from the UK rave scene and characterized by frenetic rhythms - was praised as the music of the future, it almost disappeared, leaving the way to its UK garage and dubstep offspring. Strangely enough, by these days, the only people still captivated by this music were indie rappers, like Zion I or, later, The Orphan, Noah23's main beatmaker, who confirmed his passion for 180 bpm music with the album Atoms of Eden. 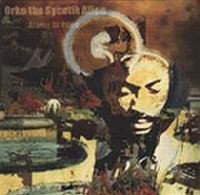 Seen in the distance, it didn't sound too exciting. Crossover projects like this have rarely been successes. But something was different, there: the rapper to lay his words on The Orphan's beats would be Orko, the Sycotik Alien, San Diego's rap scene veteran, also a core member of the Global Phlowtations collective, a key character on the prolific Californian underground hip-hop scene, and the author of multiple – generally very lo-fi – albums, including a joint record with Company Flow's Bigg Jus, released a few months before this other collaboration.

With Atoms of Eden, the rapper, and some others like Odessa Kane, Zagu Brown, Ambush and Phoenix Orion, spat words with comfort and celerity, talking about some scientific, futuristic or political matters on a finely crafted jungle - the other name of drum'n'bass - sound. They did so all along the record, with the exception of a few more conventional tracks, like the remarkable and devastating "Wack as Fuck", a powerful charge against wack emcees, including some Black Moon-like hook, and a few anthological punchlines, a track probably designed to reinsure pure rap heads too disconcerted by the English and electronic sound of the beats.

Both protagonists were successful with this crossover experience. Orko demonstrated he was a rap virtuoso, his fast flow being at ease with the frantic music tempo. It sounded good, despite the melodramatic turn of some tracks, like "Symphony of Light" and "Double Helix" – both glimpses of what The Orphan would deliver later, under the Kingston moniker, as part of Blue Sky Black Death. The alchemy between raps and sounds was close to perfection, as with "Art of Deception" and "Innerspace Massive". This album, finally, provided Orko with the unbridled rhythm his quick and threatening flow may have always required.