B-Boys in Occupied Mexico was 2Mex's first true album, a promising beginning, a record which should have boosted the rapper's career. An excellent MC and performer, the guy had the potential of a star, everyone should have expected an opus magnus from him. Such a masterpiece, though, was never delivered. And now, many years later, B-Boys in Occupied Mexico is still 2Mex's best album. 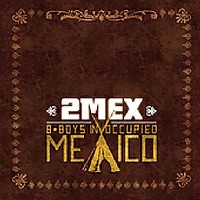 In 2001, 2Mex was somehow in the heart of the West Coast Underground. He was its hotspot, its gravity center (and I am not saying this because of his weight). A Good Life Café attendee, an MC affiliated to both the Afterlife and the Shape Shifters crews, a member of the Visionaries, the Mindclouders (with Mum's the Word), Of Mexican Descent (with Xololanxinxo) and the Brainbusters (with Murs), the fat Mexican with a breathless and jerky flow was everywhere. The emblematic B-Boys in Occupied Mexico was the product of this omnipresence, the rapper, with the help of the three most important beatmakers of the place (Mum’s, Nobody and Omid), exploring on it all of the multiple styles the Californian underground (or even rap in general) had tested in the past, or would experiment in the future.

With B-Boys in Occupied Mexico, 2Mex delivered successively some nice guitar-rap songs ("Humble is the Style of the Day", "Across & Down", "Love You the Same"), some chili rap declaimed in Spanish ("Control Mexica"), social comments ("The Truth"), a tribute to drummers and percussionists ("Percussion Precaution"), some kind of Oulipo rap (an "M the Memo" made exclusively with words starting with the letter "m") and other lyrical exercises ("Making Money off God" with another rap virtuoso, Busdriver). He lapsed into nu-soul ("Wonderful Memories"), or emo-rap ("I didn’t Mean to Touch your Hand", "Love You the Same"), or strange Indian-sounding things ("The Believe in Yourself Song"). And of course, he didn't forget to write an anthem to his home city, mentioning on "L.A." all the groups who made the local rap scene, from Jurassic 5 to the Hip-Hop Kclan, and to Black Eyed Peas.

This diversity, though, was also the album's weakness. With this album, his first decently produced and released, 2Mex delivered some manifesto, a dense compilation, a demonstration of his multiple talents. It was his visit card, but not a record structured around a concept. We would have to wait for the latter, for years and years, and unfortunately, our expectations would not be satisfied. The rapper would record many other albums, better and better advertised, but less and less convincing. And so many years later, B-Boys in Occupied Mexico is still his most accomplished. Not a classic, but a must-have, thanks to great tracks like the hallucinated "Offering", the repentant love of "I didn’t Mean to Touch your Hand", the nice "Love You the Same" and the epic "The Believe in Yourself Song".