By the early 2000's, because of his incredible and inebriated voice, his subtlety, his sense of humor and his vulnerability, because of his style made partly of classic hip-hop, partly of Project Blowed-influenced innovations, we predicted a triumph to Awol One. But it didn't happen. The most charismatic Shape Shifter never capitalized on the buzz around Souldoubt, in 2001. He remained an unsung hero, and he never released the masterpiece we expected. On the opposite, his records would become less and less noticeable, with the exception of the very convicting Only Death can Kill he released in 2007 with Factor, the Canadian beatmaker. 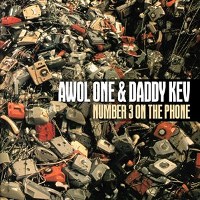 The isappointed fans, though, can always go back to his first releases. They can rediscover some imperfect but pleasant albums: Souldoubt for example, and its many hits, the record which should have made him a star; or Slanguage, a testimony of the time when Daddy Kev melted rap and free jazz. And, last but not least, Number 3 on the Phone, the closest thing to a classic he would ever deliver.

This record, though, was not made to conquer the world. Originally, it was just a CD-R, available in 300 units only on Alworus' own label, and later rereleased by Germany's VinylKings on vinyl, before Daddy Kev's Alpha Pup made it available again, exclusively in a digital format. The record had some hits, like the latin sounding "Decompose", but it was overall much quieter and more laid-back than its predecessor, Souldoubt, with jazzy tracks like "Suck My Brain" or the remix of "Wild is the Wind", sang by an unknown girl with a velvet sounding voice.

However, and with the help of Daddy Kev's production, Awol One was at his best: he was this complex character, who was able to move in the blink of an eye from anti-wack braggadocio ("Idiot Breath") to self-depreciation, alternatively rapping in a direct and self-confident way, or mumbling like a loser. Also, more than most of his other records, Number 3 on the Phone had a limited number of weak tracks. "Zygote", maybe, was the only one. And this album also disclosed one of Awol One's strongest songs, "Carnage Asada", a long rambling about some lost love, delivered in a trance with some kind of sing-song, with voluptuous piano sounds.

"If I die without having a Grammy, or if I never be on TRL, that's OK, I know who I am, and my friends and my fans". Thus prophesized Awol One prophesized on this record. Indeed, he would never blow up; he would stay a cult rapper. He wouldn't extend much his fan circle, but those would know how to cherish Number 3 on the Phone, and how to appreciate a rapper, by then at the top of his talent.