Originally, Jesus Malverde was a Mexican bandit killed by the country's authorities, in 1909, just before the revolution. It is not sure he really existed, but whatever: progressively, he became a legend. Once dead, he turned into a similar figure as Robin Hood, with a few Christlike traits, and an unorthodox cult developed around his memory. Miracles have been attributed to him and, with local Catholics, he turned into an unofficial patron saint, the one revered by the criminals and drug dealers of Mexico's slums, as well as in the Latino areas of the US. 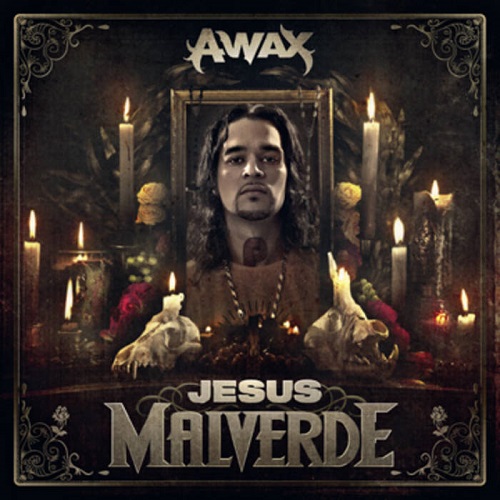 By claiming the patronage of such a character, and showing up himself as a new avatar of the Mexican outlaw, A-Wax set the tone: he would talk about drug dealing and addiction, his lyrics would be about gang wars and girlfriends used as mules. And so that there is no ambiguity about his niche, the rapper from Pittsburg, in the Bay Area – who appears to have a criminal background himself – leveraged his relationships with the Brick Squad folks. No less than Gucci Mane, Waka Flocka Flame and Southside participates to this release, as well as others like DJ Paul, Compton Menace, Eminem's protégé Ca$his, and the beatmakers Cardiak and Loud Pack.

And that works perfectly well. His songs are bombastic, and full of addictive hooks, with explicit lyrics such as "I am just selling dope" ("Work"), or "I am a Pyrex boy, keep it cooking" ("Pie-Rx Boy"). He has hammering synthesizers, on "On Sight", and spirited ones, on "Gun Range". There are sirens as well, on "Work" and the "Make Room" remix, his respective collaborations with Waka Flocka and Gucci Mane. Sometimes, however, A-Wax quiets down, with more ethereal tracks like "Gone Fishin'", "Her Mistakez", "Selfish", and "The Shooter". Some others are questionable, like that "One More Time" built upon Daft Punk's eponymous song, but they are rare. Jesus Malverde is never off-topic, and musically, it is almost constantly outstanding. Though A-Wax is from California, this is one of Atlanta trap music's best releases this year.