It had been predictable: sooner or later, hip-hop would have turned progressive. This happened, indeed, by the late 1990's, as one of the major trends behind the indie rap movement. Only a few, however, represented as well as Mike Ladd did this willingness to anticipate the future, to go beyond rap or, for some, to renew the experimentalism of hip-hop's beginnings. 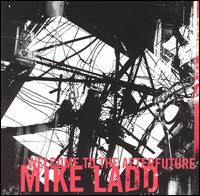 Just look at Ladd's profile: here was a university teacher, fond of spoken word and rap poetry, describing apocalyptic visions about a postmodern Babylon on some languid, complicated, mutating and hallucinated kinds of hip-hop beats, full of futurist or crossover sounds, including world music trips to Bollywood or elsewhere, all compiled with varying levels of success in a few concept albums (just remember about the Infesticons and Majesticons).

Of course, all of this did not necessarily age well. That is the case for Welcome to the Afterfuture, an album Ladd released in 1999, and generally considered as his most accomplished. Today, it can be a trying experience to listen again to these long tirades about a future which didn't keep its promises - "where's my floating car, my utopia", did the rapper wonder on "5000 Miles West of the Future" – and those arid beats where any funkiness had been erased.

Some tracks were indigestible, true enough, like "Bladerunners" and its sluggish bass, so boring that even Company Flow couldn't improve it. Also, Ladd wasted much too early his strongest efforts, the first 3 songs being some of his best. And some of his experiments were missing their targets. Too deeply rooted in its time, this album sounded irremediably aged one decade later.

But it still had some precious assets. The first of these was Ladd's spoken word, one of the most convincing ever, an exception for this risky exercise. There were also some great highlights on this record, like the elegiac "To the Moon's Contractor", the slow and chaotic "I Feel Like $100", and the aerial and majestic "Planet 10", where our poet and rapper manipulated astutely his own voice, switching from bass to some ethereal and helium-sounding hook. Thanks to these clever tracks, and despite the weight of years, Welcome to the Afterfuture must still be remembered as a capital episode of last millennium's avant-rap.