Let's set the stage: a certain Dan Smith, a.k.a. Listener, an MC and founding member of Deepspace5 - a central band of the Christian rap galaxy - came back in 2010 with two new friends, a bassist (Kristen Smith) and a drummer and guitarist (Chris Nelson), and with a big moustache. Seven years after he released a record with Mush Records, the ex-rapper delivered his personal philosophy all along a new album, Wooden Heart, through some extreme and new kind of spoken word. 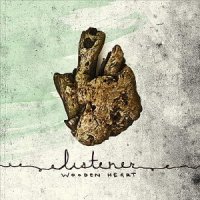 There, Listener screamed, literally, in a gut-wrenching way, with a tormented and alarmed voice coming from the back end of his throat. He almost wept, with electric and stormy rock noises in the background, on tracks with unreasonably long titles like "You Have Never Lived Because You Have Never Died" or "Save Up Your Hopes Friends", tugging at the listener's heart-strings with long and roaring sermons.

OK, you're still there? You haven't run away yet?

Very good, since Wooden Heart is a rewarding record, despite its coarse facade and this repelling description; you will be surprised to enjoy it, with a mix of pleasure and embarrassment, thanks to this freewheeling guitar, blowing hot and cold, mixing slowness and frenzy, serenity and furiousness, and the acoustic with the electric. You will also like the charming ukulele ("You Have Never Lived Because You Have Never Died"), banjo ("Save Up Your Hopes Friends"), cello ("Most Roads Lead To Home", "Seatbelt Hands"), synthesizer ("Falling In Love With Glaciers") and trumpets ("Building Better Bridges", "You Were a House on Fire", "Falling In Love With Glaciers" again), which fit the lyrics as well as perfect beats can marry raps, never falling into the disgusting jazz rock one could fear, with such a formula.

Listener had already displayed some of the current tracks on another album, Not Waving Drowning. With Wooden Heart, however, he perfected them; he brought them to a new dimension. At the end of this post-rock, post-hip-hop, post-slam, or post whatever - for Listener, this is "talk music" – record, you will be finished and exhausted; exhausted, but replete, if not with the life lessons shared by Dan Smith, then with the musical experiment he is proposing with this hpersensitive album.

PS: thanks to my friend Gnusball for having advertised this record to me.