How many records like this? How many of these small masterpieces, released at the wrong time, in the wrong place? How many never reached the right audience, the right ears, and ended in the dustbin of the music history, just because they lacked the right media coverage? First and foremost, how many of them will be rediscovered, restored, and saved, one day? This is hard to assess, obviously. But let's make sure that Cypha 7's excellent Got Struggle!, an album only released as a CD-R in its time, never meets the same fate; that it never sinks into oblivion. 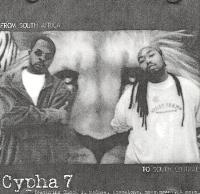 Cypha 7, or Cipher 7, or C7, was a duo funded by Shaheid, and Akim Allah – a rapper still active nowadays, also known as A.K.M. – both affiliated to the huge Project Blowed family. Close to Freestyle Fellowship, C.V.E. and the Hip-Hop Kclan, they were also friends with Shock G, of Digital Underground. After they made a name for themselves on stage, and as many second generation Blowedians, like Busdriver and 2Mex, they released records on Afterlife Recordz, and most notoriously their first album Pages from the Book of Life (1998). Six years later, they would release another one, Got Struggle!, released in a DIY way in 2004.

In the tradition of the Project Blowed, both rappers proposed a lean, supple and feline kind of rap, playing with words, and beats with a "live" feeling, thanks to dynamic drums and other "real" instruments heavily influenced by funk and jazz. This provided the album with a melodic mood, for example with "Bitch Killa", the spirited synthesizer of "Bounce Off the Planet", or the splendid "One Luv" and "Wild Wild West". Most of the time, the tone was sweet and smooth, as with the nocturnal stories of "Night Life", featuring Shock G. But don't get them wrong. As the album's title suggested it, or even the Black Muslim sounding moniker of Akim Allah, the duo's rap, despite a few abstract lyrics, was deeply rooted into social reality.

The ghetto was never too far. It was in the background on "One Love" and "Wild Wild West", or at the heart of the matter with "It's a Hood Thang", and "20th Century Slaves", a track against police abuses. Akim and Shaheid were not sacrificing to gangsta rap, though, if their ironic ego-trip had to be trusted, on "Astro Pimp" – the album's best known song, which they would recycle on the second Project Blowed compilation, in 2005. They were more into edutainment, like with "Almighty Dollar", a subtle track about money's dangers and ambiguities.

The lyrics, in fact, were like the beats: clever and balanced; too much, maybe, for them to meet success. Cypha 7, indeed, would end like some many other talented bands. The duo would split, at the same time as Afterlife would crumble. Then, Akim would go through some seriously bad years, and alcohol problems, after the police killed his brother. He would reemerge a bit later only, as a solo artist, the only remnants of his adventure with Shaheid being two precious albums, both lost Project Blowed and Afterlife classics, unfortunately so hard to find, nowadays.

PS: many thanks to Akim Allah for sharing some information with me, and helping me to write this brief review