Jesse Dangerously always deserved more than the nerdcore label he's been associated with. Several releases proved this, already, where the Canadian demonstrated how funny, astute and good a rapper he was. And in 2011, our bearded and bespectacled white MC raised the bar even higher with Humble & Brilliant, a damned good album he released after 3 years of work, along with a 70 pages leaflet with contributions from the likes of Buck 65, a comic strip writer (Mike Holmes) and two cartoonists (Bryan Lee O'Malley and Hope Larson). 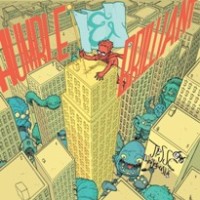 The nerdy pose was still there, through the rapper's quirky look, and a first track, "file_id.diz", named after some computing jargon. The man for Halifax – now relocated to Ottawa – was not confined to this niche, though. With his spirited humor inspired by 80's hip-hop, his versatile flow, his dynamic music full of "real" instruments, unpredictable skits like the country music sounding "Make Hymn Cry", unlikely samples like the tap dance beat on "Bring Your Girlfriend to Rap Day", and light ego-trips like "Halifax Rap Legend" – though the rapper was making fun of the title, he also demonstrated that it was well deserved – Jesse D. delivered the full formula his Backburner collective is known for.

However, except for the few contributors to the leaflet, one singer – Jeannie Taylor of Curse in the Woods – and the brief support of Audra Williams and Timbuktu, Jesse Dangerously was the one and only guy on Humble & Brilliant. As said the title of the track where Toolshed's rapper guest appeared – "Tim I Said No Guests!" – he didn't need anybody, he could do everything on his own. He did almost all the raps, and produced the complete record; including doing the scratches and playing instruments like drums, organ, ukulele, and glockenspiel.

Humble & Brilliant, also, was built as a whole. It was a true concept album, split into two parts – "Balling Out of Control" et "Balling Out Uncontrollably " – the first playful and bouncing, with punchy tracks like "Tim I Said No Guests!", or this "Holocaust Cloak" which sounded both old school and rock'n'roll; the second quieter and introspective, ending with a "Triptych" where the rapper shared confessions and thoughts about pornography, and which end was a superb apotheosis. Humble and brilliant? Yes, indeed. With this record, however incredible it may seem, Jesse Dangerously has proved that one could be both.