The transition of Kool Keith from the funky Ultramagnetic MCs to the more futuristic and hallucinated Dr. Octagon was partly due to the rapper and producer Godfather Don. Momentarily recruited by the former, in 1992, he didn't stay too long in the group, his dark beats not fitting completely with the rest. This didn't dissuade Kool Keith, though, from continuing collaborating with him. 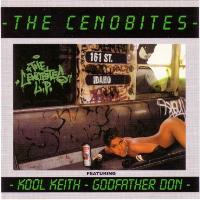 And one year later, just when he was starting his new label, Fondle'em, radio presenter Bobbito Garcia asked the two of them to record some new tracks, locking them up into a basement until they delivered a new record. Because of this seclusion, the duo would be called the cenobites, but these two were a bawdy kind of monks, and their lyrics had a strong smell of sex.

The outcome would be released in 1993, as some amateur EP, attributed by mistake to the "CenUbites". Well received in hip-hop's underground, it would be reedited several times, first as a LP, in 1995, with the addition of a remix of "Kick a Dope Verse" and a version of the Ultramagnetic MCs' "Checkin' My Style" retitled "Return To Zero", including some rhymes from Godfather Don; and later, in 2000, it would be released as a CD. Since then, the EP has become a collector, and for good reasons: the Cenobites's record, indeed, was somehow the birth certificate of the late 90's indie rap scene. Kool Keith, already a seasoned rapper, proved that he was still ahead of his time, getting the ball rolling and inaugurating the great story of Fondle'em, the archetypal indie label.

On the Cenobites EP and LP, the duo perpetuated the ego-trip tradition, like with the memorable "Kick a Dope Verse", one of two tracks where Bobbito was trying his hand at rap. But in addition, all the future routines of indie rap were already there: like with the corrosive "How the Fuck You Get A Deal", a violent attack against major labels, starting with a fictive dialogue between a young rapper and an industry bigwig; like with the old school sounding "You're Late", where Kool Keith and Godfather Don were deploring the loss of some hip-hop golden age, along with another veteran, Percee P; like with "Mommy", were they moved toward surrealism and abstraction; like with "I Was Forgotten", where they displayed a taste for the morbid and used a complex vocabulary, anticipating the science-fiction oriented underground rap to come. And of course, everywhere, they mocked wack MCs, these no-talent rappers, desperate to succeed.

The music was on par with this uncompromising posture. It was made of hardcore hip-hop, like with the aggressive and Onyx-sounding "Rhymes I Sniff" and "How the Fuck You Get A Deal". It was also full of pure 1990's jazz rap, sometimes in a laid-back way, like with "Keep On", or, more often, with a more somber, heavy and smudgy mood, for example with the trumpet of "Lex Lugor". It was full of elastic and crazy flows, not too far from what Organized Konfusion was proposing at this time. It was a nostalgic record, but still, paradoxically, it was also the sound of its time and, already, a glimpse to the future.