Released in 2004 by two KutMasta Kurt protégés – his name was in the title, but he took not part to the record – this album had not been well received by the critics. They reproached almost everything to Dopestyle 1231. They said that it was not funky or melodic enough, that the duo was some Johnny-come-lately, delivering ten years too late its science-fiction inspired underground rap. What some despised in this record, though, was precisely what made it delectable. 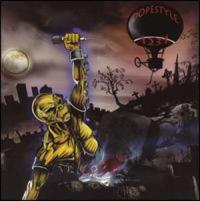 None of these reproaches was relevant. MC Dopestyle, with his rasping and guttural voice (except when he was trying some incongruous falsetto, like on a few tracks), and Tom C, with his dark production, showed that they liked insane atmospheres. And to deliver these, true enough, they used old recipes. Also, with the likes of Del tha Funky Homosapien, Kool Keith, Motion Man and Vast Aire (on the hallucinated "Sunz of Shazam") featuring on the record, they fully posed themselves as some heirs of the late 90's gothic and weirdo indie rap.

As announced by the cover art, and starting with "I'm Grendel", Tom C and Dopestyle revived horrorcore's cryptic and morbid themes. Like so many before them, they played with ghost train-like effects, like the laughter from beyond the grave on "Threshold Underbelly", or with ethereal ambiances, like with the feminine voice on "Darkspell", and they borrowed to rock its more sticky sounds, using many guitars, looped on "Granulated Sugar", panting on "Threshold Underbelly", scathing on "Bobby Wobbly", or heavy metal sounding on "Lone Ramblin'", "Rap Delite Delux III", and "The Game Is Finished".

The duo from the Bay Area was renewing the formula introduced by Dr. Octagon, that's true, just replacing science-fiction with horror movie themes. "Wedgie", for example, a track with Kool Keith, wouldn't be out of place on The Ecologyst. As a result, to be fully enjoyed, this album needed to be savored like Dr. Octagon, that is like a hip-hop comic book. With this came pleasure and the realization that this record was its true successor, much more than the overrated Deltron 3030, or the anecdotic Return of Dr. Octagon released in 2006. If some hadn't realized this in 2004, it may be because the same were already way off the mark in 1996, the first time they heard about Kool Keith's space doctor.