With such an alias, this one laid clearly his cards on the table. Arthur Arellanes III's music, indeed, was both bizarre and arty. Once a spoken word artist belonging to the California's underground hip-hop scene – the guy played sets with Blackalicious - Bizzart explored further the nerdy, crossover, intimate and experimental kind of rap launched by Anticon around the year 2000. He did even better, proposing one of the most accomplished products of the genre. 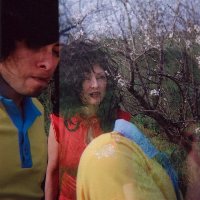 Produced by Alkaline and Accident, and fully emancipated from hip-hop's orthodoxy, Bloodshot Mama shared with the weirdest kind of indie rap all of its main features: a cover art a bit remote from rap's standards; unusual references like Can, PiL or Squarepusher, according to the press kit; the thin voice of a White guy, with a lack of strength compensated by some more charismatic guests, like Yarah Bravo, the former protégée of the Anglo-Russian DJ Vadim, on "Shark Skin Humans", or 4 Ever and Awol One, the latter blessing "Drifter" with his inimitable lethargic glow; and also, some bold and unpredictable beats.

The music, indeed, was using all possible means, switching from the quiet sound of a folk guitar to synthetic big guns, sometimes in a heartbeat, like on "Dreams of Sparrow" and "Liquid Beast", or offering the hook to a child, like on "Suicide Bomber's Parade". The calm new-age sounding instrumentals on "Mount Washington Blue and Red" would give way to heavily manipulated voices on "Blank Forest", or to the kitsch mix between a harpsichord and ethereal voices on "Drifter". Bizzart and his collaborators played with everything: with dissonant and indefinite sounds at the beginning of "Stumbing Blocks"; with tracks divided in multiple movements and full of unexpected changes; with big drum rolls; with furious violins on "Dreams of Sparrow"; and then with blazing crescendo effects, in a style not too far from Dälek's, on the sumptuous finale of "Blank Forest".

All of this was unreasonably diverse, disjointed, and sometimes even emphatic. Thanks to its short length and its haunted lyrics, though, this new kind of white, psychedelic and postmodern rap was enthralling, from the beginning to the end.