Released by the Lewis Recordings, a UK label, in 2002 – the Brits may have been the only ones willing to take risks with such a record – Primitive Plus is the enriched version of Primitive, an EP which generated an underground buzz by 1999. Edan, its author, belonged then to an emerging kind of indie rappers: the hip-hop handymen. Indeed, this graduate of Boston's Berklee College of Music took everything in charge: he provided the raps, the beats, the scratches, the cover art… And as usual in such circumstances, the output looked like a demo recorded in a scullery. 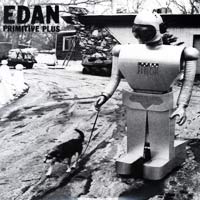 The record was very lo-fi, but this made sense, considering that Edan Portnoy's intention was to reinvent the old school style, to restore it, through multiple allusions to past idols like Kool G Rap, KRS-One, Rakim, Slick Rick, and the Ultramagnetic MC's, whom he imited perfectly on a "Ultra 88 Tribute". Our man had already demonstrated it the year before with his Fast Rap mixtape: he was a hip-hop erudite, a connoisseur, an archivist, who loved nothing more than the late 80's rappers. However, no boring nostalgia like the Jurassic 5's on this first official album. The Bostonian's tribute was full of fun and humor like, for example, when he played with the cliché of the crack addicted rapper ("Emcees Smoke Crack").

Also, Edan played with the more modern electronic sounds of the 90's decade, and he was tremendously more enjoyable and striking than the Californian revivalists when he criticized Internet MCs "Key Bored"), when he delivered some playful and weird beats ("Rapperfection"), when he left everything to the music ("A.E.O.C."), when he reinvented ego-trip ("Mic Manipulator") or when he shared his contempt of contemporary rap by sampling Japanese kid songs ("Instead of R&B bitches, I do my hooks with Japanese kids"), on the incredible "Sing it Shitface" single.

With Edan, it was as if hip-hop had chosen a different way by the end of the 80's decade, as if it never cared about so-called gangsters and R&B divas. Our white rapper was building things from scratch, and excelling in making something brand new out of the old and the dead. He would do that again a bit later with another retro-futurist gem, Beauty & the Beat, where he would refresh the psychedelic pop music of the 60's, and make it relevant for the 2000's hip-hop generation.