The very large Oldominion collective – around 20 affiliates, no less, spread between Seattle and Portland – lies at the very core of the North-West underground rap scene. No doubt there. Just because they are too many and too productive, though, it is sometime difficult to identify true gems among their innumerous releases. One of them, however, could be Polarity, an intriguing concept album released by two of its main members, Barfly and Onry Ozzborn, under the name of Norman. 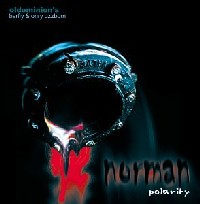 Prior to this album, Onry Ozzborn – no, not the senile hard rock singer who came back around the same time as a real TV phenomenon, please read better – had not always been convincing. Though he is more or less the group's leader, he wasn't the most remarkable rapper on One, the only - and quite recommendable - official album released jointly by Oldominion, in 2000. But in 2004, Polarity, an album he produced himself, and where Barfly rapped with him, was much more seducing and solid, more homogeneous, than anything proposed so far by these folks.

Polarity was a concept-album, telling the story of a certain Norman, some whimsical lad, half depressive, half aggressive ("One Man Band"), who would eventually commit suicide ("Rockstar Fraternity Initiation"). Barfly and Onry had an idea, there, and they used it extensively. Oh, it was still an Oldominion record : these rap deliveries, grimy tones, sampled synthesizers ("One Man Band", "Hip Hop Ver 1.7", the banging "Easier") violins ("Human Traffic") and brass ("I Can't Live Without my Ghetto"), or even the Mozart rap of "Blink Kong", didn't sound completely new. Neither did the cute feminine hook on "Martyr". "Weastwick United FC" was the only original track there, with its play with the UK soccer imagery, including references to Eric Cantona and Stiff Little Finger, supporter chants, and a false British accent.

Both street and arty, Polarity sounded as an older rap album, a rearguard record, dating from the beginning of the indie rap wave. However, it worked. Everything was cleverly built; almost each track was catchy, from "One Man Band" to the false end of "Drip". This was unexpected with Oldominion, and more generally, rare with hip-hop. Thanks to this, this Polarity album deserved to be called a good surprise.