For years, C.V.E. hasn't kept its promise. The Californian rap virtuosos were in the very heart of the Project Blowed and the Afterlife crews, they were more blessed with talents than any other rapper, but they only delivered flawed CD-Rs, poorly crafted records, full of rotten beats. For two decades, this group may have been the greatest waste of hip-hop's history. In the meantime, at the other end of the US, the Milled Pavement label, a sort of East Coast cousin for Anticon, was delivering some records full of ideas, concepts and good will, but rarely convincing. 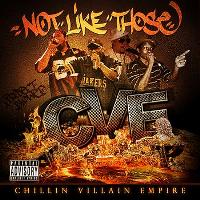 The better of these two worlds just needed to be mixed, for them to make it. These two opposite ends of indie rap, the black men from Californian on one side, and the white ones from Maine on the other, just needed to forge an alliance to offer a real chance for Chillin' Villain Empire to shine. Not like Those, indeed, is this very record: the great album nobody expected anymore from these guys, more than 15 years after the Project Blowed compilation revealed them. It is a record where, more than ever, Riddlore and NgaFsh are rocking the mic, but with a solid music, produced by Ridd himself, plus a few others (Boss Sick, Pterodactyl, Redworm, Unstable, Wassif and Xczircles from the Escape Artists).

Essentially, this was still a C.V.E. record, meaning the crazy mix of hypersonic flows, sing-song, and free form raps typical of the Project Blowed, plus a bad boy posture inherited from gangsta rap, ego-trips you would never hear elsewhere ("My mother couldn't abort me, that's my story", on "Your Choice"), bouncy sounds ("CV Rockz"), and a very small bit of R&B (the feminine voice on "Party Shake"). It stood exactly between the delectable populism of the Dirty South, thanks to its pinch of cheap synthesizers, and the experimental side of the Blowed, which influenced so many White indie rappers, like our Milled Pavement guys.

And so that nothing is missing, Not like Those had a few bangers, like "Pressure" and "I Am Heat" with their synthesizers and, for the latter, aggressive guitars, tribal drums and a few raps in Spanish; like the dazzling "Hazerdous Material" also, a track still on the same tempo and in the same mould, a new demonstration of frantic and jerky flows, but with someone singing in addition.

Finally, there is only one thing wrong with this record: it only exists in a digital format; or maybe, as a CD-R . Anyway, it was never properly released as a full album, while it fully deserved it. Really, the world of music is cruel and crazy.