Before he released this album in 2004, Die Young had not necessarily been the most remarkable of the Shape Shifters. The guy was regularly shouting his head off like an exalted rock star, but he lacked the charisma of peers like Awol One or Existero, or the uniqueness of Circus. And on his side, despite his position in the very center of the West Coast Underground, thanks to his LA2theBay website, Deeskee had not always been the boldest and the most adventurist beatmaker. 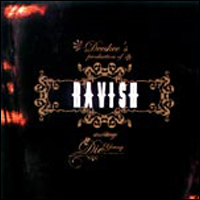 Each of them, though, had released some significant albums, at California's underground scale; not masterpieces, but enjoyable and pleasant records. 2003 had been a great year for both, thanks to the delightful Dead Air Project producer M. Fusion had offered to Die Young; thanks, also to Deeskee's own Blacklight Sessions, and to his free jazz / rap experiments with Awol One and The Grouch.

In 2004, both musicians kept the momentum with their joint effort, a perfect alchemy between a rapper and his beatmaker. Listen separately to Ravish's raps and beats, and you could hear each of the guys using their usual formulas. But put together on this very short concept-album influenced by horror movies (Die Young was playing a vampire hunter), they fitted perfectly with each other.

Deeskee was providing great support to Die, he knew how to sublimate his hoarse and tortured rocker voice, using plenty of guitars ("Dazed", "Run Into The Sun", "Vampire Hunter", "All of Me"), some piano melancholia ("Chainletter") and easy but astute samples - from the Beach Boys' "Caroline No" on "White Oleander", or Deep Purple's "Child In Time" on "Carnival", if I get these right.

On Ravish, Die was at home, this album was his thing. As a matter of fact, when other MCs were helping him (Busdriver and 2Mex with "Dissapear", Existereo and Awol One with "Ghostwriters"), even if these were better rated than him, it didn't work anymore. The only exception was "Chainletter" with Akuma and LifeRexall, but we knew that all three rappers were used to collaborating with each others, as parts of the Chainsmokers. Die, mostly, didn't need anyone except Deeskee to complete this album, one of the Shape Shifters' most pleasant and homogeneous.