Alleged Legends was released in the heyday of Peanuts & Corn: in the middle of those years, 1999 to 2003, when the modest label from Winnipeg, Manitoba, was releasing gem after gem. For once, though, label owner Mcenroe didn't produce the album. The main protagonists were even not part of Break Bread, the collective in the heart of the label. They came from others parts of Canada. 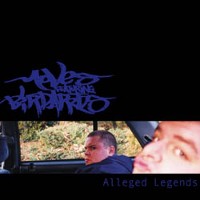 DJ Moves, indeed, the other best canadian beatmaker – at least in his most focused moments – was in charge of building the beats around the special voice timbre of Birdapres (pronounce it Bird-Uh-Prey, like with the French word "après"), around the both mocking and straightforward rap of this British Columbia rapper related to other indie great names like Moka Only, Prevail from the Swollen Members and the Styles Of Beyond. However, on this trans-Canadian collaboration between Dane Goulet, the Vancouver MC, and Brian Higgins, the Halifax DJ, the touch was similar as other records from the same label: jointly, Moves and Birdapres reinvented NY's jazz rap, mixing it with some political observations.

On this record, like on others at Peanuts & Corn, a quiet rapper was talking on simple, repetitive and sober looped beats. He knew how to play with his flow, though, how to adapt it to his lyrics – astute, the lyrics, by the way. The producer, also, knew how to use relevant variations or ruptures - check "Opposite Angels", for example - and some of his tricks were bolder than they seemed, like the drums on "Bird Is…" and "The Alibi". It all sounded familiar, but it wasn't formulaic. It was authentic, pure and virginal. It worked as if it was the first time again.

Alleged Legends was only made of good tracks, including the admirable "Commies" where Birdapres, whose grandparents had been Reds, reminded the listener that communism had not only been the Empire of Evil, in the past. All along the album, at a time when experimentalism was the key word in hip-hop's underground, Moves and Birdapres showed that evolutions were stronger than revolutions, and that genius and originality reside more frequently in details than in the flashy.