In the year 2000, a period of glory for the indie rap scene in general, and more particularly for this bunch of Angelinos, the Shapeshifters had thought of everything. In addition to Know Future, a record which looked like a 2 hour posse cut declaimed by a multitude of MCs on nonsensical beats – their true masterpiece, though – the Californians had released just after, on Daddy Kev's Celestial label, an Adopted by Aliens much easier to grasp. 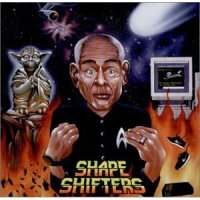 As the Star Wars and Star Trek inspired cover art attested it, this album had been made with the same mold as the other. The Shapeshifters were still adapting to the nerd culture freewheeling and virtuoso raps inherited from the Project Blowed, scattering them on chaotic beats and outer space sounds. But this time, those almost sounded like true songs, instead of never-ending tracks, undistinguishable from the others.

Adopted by Aliens recycled songs they had already released on Know Future – "Brain Fish Oner" and "Beatle Borg", renamed "Brainfish Reanimated" and "Beetleborg" – or on their first album, Planet of the Shapes. They did the same with tracks from the 2012 and Triple Threat EPs – like with the old school sounding "Strange Birds", and this "Mixtape Megamix" signed by their deceased DJ, Rob One. These, however, were organized in a less anarchic way, and benefited from a better sound, supplemented with relevant scratches.

For those who lacked reference points with the Shifters, this almost normal album, the most classic among their first three, was the best entry point to their universe, thanks to small melodies, those created by the great Omid on the introductive "Who's Got Presents?", by Fat Jack on a "Wake Up Dead" where featured Mikah 9 from the Freestyle Fellowship, or the piano which accompanied MCs philosophizing about the flight of time, on "Words of Wizdumb". Even the weirdest noises sounded catchy, when mixed with the warm and erratic voice of Awol One on "Flossin'". And let's not forget the final and epic "Korn Bizkit" where the Shifters were mocking some ludicrous rap metal bands of the time.

On Adopted by Aliens, only Circus' delirious stances on songs like "Mos Eisley" were still beyond neophytes' comprehension. Those needed to taste and enjoy the rest in order to understand fully what the Shapeshifters' formula was: an update of Afrika Bambaataa's creative, open and exuberant "Planet Rock" – the Californians were proposing a version of this for 2012, just here – and, more generally, the bona fide music of the year 2K.