One day, people will discover Oddjobs again. Because, through the 5 years of their existence, they delivered quite regularly good quality albums. Because they ran alongside some indie heavyweights, like Cannibal Ox, Aesop Rock, Atmosphere and Eyedea, and that, consequently, crate-diggers of the future will have no difficulty tracking them. For these reasons, they won't be dropped into the dustbin of history. They deserve better than that. 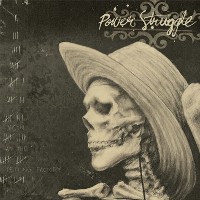 The other reason to reminisce over Oddjbobs is related to the bands which rose from their ashes, the remarkable Kill the Vultures, but also the less famous Power Struggle. The latter, a duo consisting of MC Nomi and DJ Deeltax, has released only one album, in 2005. But this one, Arson at the Petting Factory, can easily be compared to anything the other group produced, with a sound which – no surprise since they were signed on a punk label, New Disorder Records – was flirting conspicuously with rock music.

With his organic kind of hip-hop, Deeltax had already used guitars, basses and drums. And even before Oddjobs was funded, he had already mixed rap and rock with his previous group, Bad Ronald. However, except on some tracks like the excellent "Smoke", he had rarely been that punchy. The only album of Power Struggle, indeed, was full of rock sounding beats, from the beginning to the end. It had no sample, almost no machine, only wrenching guitar riffs, and the rap touch was mostly limited to Nomi's rants.

The album, however, had the key characteristics of all good hip-hop records, those where a long-time collaborating DJ and MC are complementing each other perfectly. Above Deeltax's heavy guitars ("Arson at the Petting Factory", "This One") or cold wave sounding ones ("Letters"), Nomi was using the kind of rap which fitted the best: the rebellious one. The MC was calling for an insurrection, fighting America, and he depicted the world's situation with dark tones ("Working Class Drinker", "The Bad Side of Town"). We could even pogo on some of the tracks, while on some others a fire was smoldering ("Kill Winter").

In the middle of the album, however, Deeltax released the pressure. He used a sad guitar and saxophone on "The Bad Side of Town", a melancholic introduction à la The Cure on "Lost on a Starless Night", a synthesizer on "Hurt Healer", and a piano on "Keep it Goin Now". His music was progressively becoming jazzier, more indolent, especially with the spoken word Nomi dedicated to his Philippines' roots on "King Phillip", a complete opposite to the rest of this album, overall extremely exciting for both nerves and neurons.