This is a natural phenomenon. Each time we understand that an artist with a tremendous talent and potential will never take off, once we see that he will stay a well-kept secret for the happy few, that he will forever release imperfect albums and miss his appointment with fame, we also realize that his greatest record, in the absence of the expected masterpiece, may finally be the first that generated a buzz. As far as Busdriver is concerned, this record was Temporary Forever. 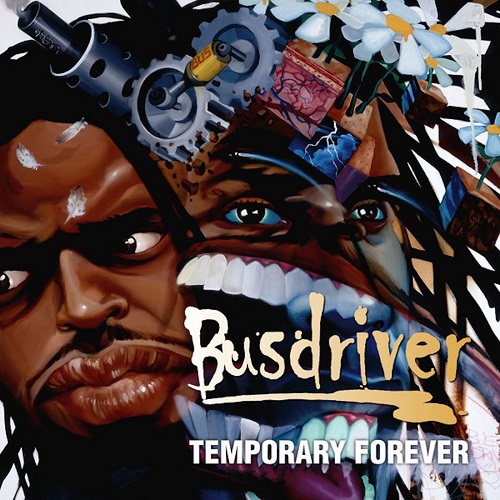 In 2002, after two albums displaying his crazy flow, Memoirs of an Elephant Man and This Machine Kills Fascists - both worth the notice but inaudible because of awful beats - the strongest heir of the Project Blowed family, the MC with the most elastic verbal delivery ever heard, was finally releasing a record with the help of true beatmakers. With some support from Paris Zach, Daddy Kev, Hive and Omid, the music was rock solid. And with the addition of some key rappers from the West Coast underground, like Radioinactive, the two guys from Of Mexican Descent, and the great Aceyalone, the output couldn't be anything less than classy.

All wasn't perfect, however. Despite a good start, this album was too long. Also, as always, Busdriver had to struggle to submit his complex and incredible flow to the beats. A beat from the famous DJ Johann Sebastian Bach, no less, was finally needed to provide a music on par with this flow ("Imaginary Places").

However, nowadays, Temporary Forever is still, by far, the best thing ever delivered by Busdriver. It is a jazz rap record, literally; with incredible verbal skills, the true apex of the Project Blowed style, with improvisations and crazy exercises even the most extreme free jazz would never dare. And by the same time, it never was uselessly experimental. With this MC, improvising was natural; this fellow felt the urge to freestyle, even when he was doing something as trivial as ordering a hamburger at a McDrive (the hilarious "Stylin' under Pressure").

As for the lyrics… Well, these were full of words, but they meant much more than simple fancy tracks like "Single Cell Ego" looked like. Busdriver's first band, 4/29, was named after the Black riots of Los Angeles in 1992. And even if it was no longer his main topic, even if the guy was too clever to be preachy, there was still something of a social observer with him, for example with "Gun Control".

With Busdriver, however, the form precedes the content. And it is nothing else but free, free, free. Tempos and rhythms are free, tones and timbres are free, and even melodies, since, yes, this rapper can sing – listen to "Somethingness" – as well as he can do some spoken word ("Driver's Manual"). Beats are free, they can take completely unexpected ways, and be much more than simple loops (the flute on "Suing Sony"), as they need to follow the volatile flow of the rapper.

The genres sampled here are free as well: we can hear some classical music, thanks to the classical composer we mentioned already; but we can hear also some folk guitar with "Opposable Thumbs", or some blues, with "Post Apocalyptic Rap Blues"; and jazz of course, on the well named "Jazz Fingers", with Aceyalone.

This record went into all directions. It was a bit too lengthy; and out of control, from time to time. But it was full of bliss. Despite its density and this flood of words - we had even more than in 20 volumes of the Encyclopedia Britannica - we could find bangers in it, real gems that would stay forever engraved into our brains, like "Along Came a Biter", the oriental sounding "Idle Chatter" and, obviously, more forever than temporarily, the eternal "Imaginary Places". Since Busdriver, unfortunately, or not, finally never did better than Temporary Forever.