Freestyle Fellowship, Hieroglyphics, Hobo Junction, the Log Cabin / Mystik Journeymen / 3 Melancholy Gypsys / Living Legends family… These bands laid the foundation of the West Coast Underground hip-hop scene, but they never reached the level of success or exposure they deserved. And what about Bored Stiff? For those, it has been even worst; even more than the others, they have been condemned eternally to an almost full confidentiality. 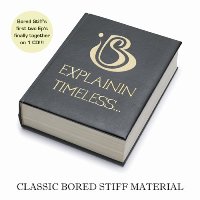 Despite of much praised EPs like Explainin'... (1995) and Timeless (1997), and two albums released on their own Hella Records, Ghetto Research (2001) and From the Ground Up (2008), this band from San Francisco, created in 1992, never left the underground. Equipto was the only one to approach a greater audience, thanks to his collaborations with Andre Nickatina. However, with around 12 members, this large collective of people had a remarkable longevity, surviving the tragic death of Jo Jo in 1996 and Rick Flare, aka DubStar, in 2010. And sometimes, they remind ourselves about their existence through new versions of their cult records, for example an enriched rerelease of Explainin'… in 2001, and, in 2008, another one which compiled the same EP with its successor, Timeless.

Today, this compilation is still the best introduction to a group with many similarities with neighbors like the Hieroglyphics; or even the Project Blowed, when their raps get a bit freer, when they start sounding 'live' with the help of frantic drums or unexpected flutes ("Peaceful Rotation", "Down the Line", the instrumental "Heart Beat", and "We Up"). Just like these bands, Bored Stiff's sound was sometimes closer to New-York's rappers than to their Californian fellows, thansk to their jazz flavor, their elastic basses and their saxophone or trumpet samples. However, their versatility, their playful style of rapping, their tone changes, and their breathy music, were all typically West Coast.

Intoned with multiple voices, the tracks of these two records made one, were rich with surprises and ruptures; Bored Stiff multiplied astute findings. In a pure indie spirit, they enjoyed a style heavily inspired by MC battles, they claimed their love of hip-hop and defiance of the industry, and, most notably on the second EP, their shared sometimes the pessimistic mood of their times ("Nine-Six"). And with strong achievements like "Explainin", "Change of Mind", "Perfect Opportunity" and its mariachi trumpet, "Tell It like It Is", "Next Sunlight", and most of all the superb "The Soil", they collected jewels. Only the bonus tracks were overloading this compilation, which confirmed overall that Bored Stiff deserved a full place among the groups mentioned above; it proved it was, yes indeed, timeless.