We could find anything on Peanut Butter Wolf's first LP, in fact more a compilation than a regular album. All the styles of the times had found a place, there. "Straight in your face" or more mature kinds of raps, creative beats, experiments, old school accents ("Keep On Rockin It" with the late Charizma), and allusions to the ancients, starting with the title, derived from Public Enemy's "My Uzi Weighs a Ton". And lots of turntablism: "Casio", with Babu, "Phonies", with DJ Design, and most of all the colossal "Tale of Five Cities", created by no less than 11 DJs (Beat Junkies, X-Ecutioners, Cut Chemist, Kid Koala). 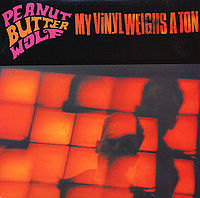 This album was like an overview of this peculiar Californian scene at the right time. A few months before they would release two of Stones Throw's best albums, Soundpieces: Da Antidote and The Unseen, Lootpack and Quasimoto/Madlib were at their highest on "Styles, Crew, Flows, Beats". Before they would become the representatives of a too conservative and unimaginative kind of hip-hop, Planet Asia with "In Your Area" and Rasco with the excellent "Hold Up", were still relevant, thanks to their percussive and confident raps.

The arty cachet of the Bay Area and PBW's links with DJ Shadow, then at the height of his glory, helped promoting this record. It was acclaimed even in rock critic circles, announcing the universal celebration of an overrated Madlib in the years to come. With My Vinyl Weighs a Ton, however, Peanut Butter Wolf was more closing his work in the shadow of the 90's, than anticipating the sound of the next decade. Also, all was not perfect on this overloaded album. The genius of Kazi's "Breaks 'Em Down" or Zest's "Interruptions", dexterously produced by Peanut Butter Wolf, were counterbalanced by less impressive "Rock Unorthodox", "Definition of Ill", "Mobbin" and "Necromancin", and some humoristic tracks like "Theme from a Peanut Butter Wolf" were not particularly worth the notice.

Today, many would consider that PBW's best album is Big Shots, a compilation of songs he recorded with Charizma by the beginning of his career. My Vinyl Weighs a Ton, however, has another function; it is more some sample of what indie hip-hop looked like in 1999. And indeed, there is no better record to understand the specific atmosphere of these times, which thrilled more than one, just before new transformations for hip-hop, and a growing fragmentation between its mainstream version and its so many underground scenes.