Some, hip-hop purists maybe, prefer the first Organized Konfusion album. With the second, Stress: The Extinction Agenda, they believe the duo was too close to the flavor of the time, when they invited Buckwild and Rockwilder to produce some beats, when they proposed the kind of rap New-York appreciated at this time, a rap made of hardcore and martial jazz-derived loops. However, it was precisely because of this, because of the alliance between a warlike toughness à la Boot Camp Click and the peculiarities that have always characterized Pharoahe Monch and Prince Po, that this album is a classic no connoisseur would dare ignoring. 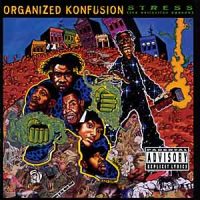 More direct, more aggressive, straight in your face, full of the deep voices of angry black men shouting all together ("Drop Bombs", "Bring it On", "Why"), this album was not too far from delivering hits, even if these were much too special for reaching a huge success, starting with an impressive "Stress", from which we will retain these unforgettable words, mentioned and sampled by others, most notably the Jedi Mind Tricks:

Why do you choose to mimic these wack MC's?
Why do you choose to listen to R&B?
Why must you believe something is fat
Just because it's played on the radio 20 times per day?
My perception of poetical injection is ejaculation
The Immaculate Conception

The next tracks were as worthwhile, "The Extinction Agenda" for example, and more particularly this sequence where Pharoahe Monch was playing a chess game he could only win. Except for a tasteless "Keep it Koming", this album hit, it stroke, it hurt. It took your guts. It moved your stomach. The warm organ of "Why" was one of Buckwild's best-in-class beats, no less. "Stray Bullet", which describes from within the journey of a gun bullet, was fascinating. The record even had festive tracks, like "Let's Organize," with Q-Tip and O.C., and then "3-2-1", immediately afterwards. And in addition, the duo pushed further the innovations of the first album, like with the strange mournful tone of the weird introduction.

This record was also, mostly, Pharoahe Monch's. Though Prince Po's rap was far from average, we would only hear his partner. Monch's voice topped everything, his flow was mind-bending: there wasn't any flaw with his breath control; he was neither on-beat, nor off-beat, but just making fun out of the rhythm. Monch, indeed, was playing hide-and-seek with the beat. He rapped before, or after, or above, or under it. He controlled it, he tamed it, he made it his thing. Even when he was rapping clichés, like attacking wack MCs, or spelling his name, everything sounded fresh and brand new.

Because it was dark, traumatic, because of its untouchable rappers, because of Monch's lyrical prowess, Stress: The Extinction Agenda prefigured more than any other record the New-York branch of the indie rap to come. As a matter of fact, Pharoahe Monch would launch later a solo career with Rawkus, when, ironically, he would release his most accessible record. And Matt Doo, the guy behind this album's cover art, would draw another for Company Flow's Funcrusher Plus, making even more obvious the connection between two of the greatest and most uncompromising rap records of all times.