Once upon the time, by the beginning of the 90's, in the very deep of L.A.'s underground rap community, there was a cult band named Unity Committee. Those, however, did not live long. They split soon into two distinct entities, and each engaged in very different directions. The first of the two, the most famous, was Jurassic 5, and it tried to resurrect the playful and insouciant spirit of the old school. The second was Darkleaf, and it chose another way, more experimental, less secure, darker; and, to be genuine, quite superior. 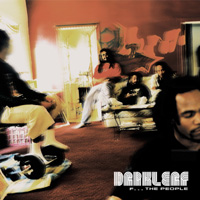 Darkleaf was made of several people: 4 MCs, named Kemit, Metalogik, Jahli and Longevity, some of them making beats as well, and a DJ, Mixmaster Wolf, also a member of Stones Throw Records' Breakestra. The number was roughly the same as for Jurassic 5, but here was the only common factor between both acts. Concerning all the rest, F... the People was the complete opposite of any music ever proposed by the others.

Jurassic 5 wanted to display a happy and positive mood; Darkleaf preferred philosophy and abstract poetry, their lyrics sounded paranoid, they brought the listeners in some dystopia of theirs. The funny guys from the other band liked playful and retro flows; those rapped in one breath, off beat, à la spoken word. The former were hip-hop purists; the latter claimed their love for Sun Ra or Jimi Hendrix. Our revivalists liked cheerful and bouncy beats; the others preferred a sober production signed Lodge Infinite, made of heavy scratches, abrasive and venomous loops, strange sounds or gloomy science-fiction beats.

And it was delicious, starting from the hallucinatory guitar, the unhealthy scratches and the weighty beat of the fabulous "Eclectic Storm". With weird details scattered here and there, the atmospheric beat of "Triple Stages", the disturbing sitar of "Jahlude", the Hispanic horns of "Sounds of Armageddon" and the hypnotic "Spanish Fly", featuring P.E.A.C.E. from the Freestyle Fellowship, F... The People turned out to be a true masochistic pleasure.

Oh, and there was another major difference between the two offshoots of Unity Committee. Despite their lack of huge success, Jurassic 5 benefited at least from the critics' favor, while Darkleaf had none of the two. As usual, journalists were wrong: those fools praised the wrong band. Anyway, as said the title of this unique official album: "fuck the people".