Artistic success works like a lottery. Talent is one of its conditions, but it doesn’t weight much compared with random encounters which will allow such or such to be better exposed than others. And though patience and time help separating the wheat from the chaff, what can they do for grains scattered on the way? In other words, how many good records have never been celebrated by any? And when they have been celebrated, how many are forgotten because the media which praised them has disappeared itself? Thousands, without a doubt, and From Point A to H could be one of those. 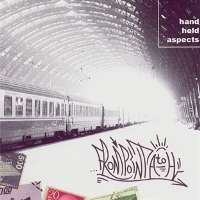 This record was one of the first releases of a short-lived label also responsible for other unsung gems, like Nobs' Workin' and Eibol's Karma Kingdom, this Eibol being one of the four members of Hand Held Aspects, along with Losaka, StayInSane and Hippo. Coming from the city of Ossining, close to New-York, but too far from its living center, and only made of white MCs, Fingerprint Records shortly made a name of itself thanks to the buoyancy of the indie rap scene at the turn of the century. Thanks also to the interest of – very – specialized webzines for Hand Held Aspects' first album, the tragically well named No One's Listening. And then it disappeared, when all this attention was no longer current.

It is time, however, to praise again this other record, From Point A to H, better produced than the previous one, and granted with the same qualities as Karma Kingdom. This was another of these records going against their times, coming back to the old school, or the Golden Age. Not formally: everything, there, sounded modern; but more in terms of spirit, with its fresh, playful, vibrating and almost ecstatic raps, with its beats stuffed with scratches and samples, and rich of welcomed misdemeanors, like the addition of reggae accents on "Shorelines", or delectable findings, like the surprising flute of "One's Perspective", notwithstanding the presence of impactful melancholic tracks ("Ice the Pain").

As required by the indie rap principle, the only rule which ever unified this otherwise eclectic and fragmented scene, this record opposed the usual clichés of hip-hop. Though the first track, a rejoicing "Sing Sing", had the former name of their city and the prison it was famous for, Hand Help Aspects invited people to forget where they were coming from, instead of representing their 'hoods. By inviting them to accept others' opinions ("One's Perspective"), by denouncing the mind-numbing media ("Living Room"), they positioned themselves as conscious rappers instead of criminals. They encouraged humbleness on "Note to Self", a letter Eibol and Stayinsane were addressing to their own selves in the future, to remind them about where they were coming from, so that success don't go to their heads.