In the year 2000, the Micranots made an impression with Obelisk Movements, a record full of hallucinated and apocalyptic undie rap they had released under Bigg Jus' sponsorship, on his Sub Verse label. This had not been their first album, tough. As early as in the mid-90's, I Self Devine (MC) and Kool Akiem (DJ) had already recorded the Return of the Travellahs cassette, which easily bears the comparison with their later record. 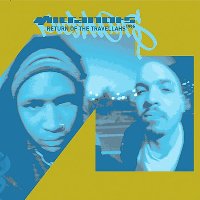 This album had been made when the duo was geographically separated, I Self Devine having moved for Minneapolis, where he tried to keep in touch as much as he could with Kool Akiem, who remained in Atlanta. His back and forth trips may be the reason why the word "travellah" is in the title. The MC, however, took this relocation as an opportunity to join the Dynospectrum collective, along with folks like Slug and Musab. No surprise, then, if it was on the latter's label, Rhymasayers Entertainment, that Return of the Travellahs was rereleased on a CD and remastered version, just after the duo's dispute with Sub Verse.

Those who had discovered the Micranots through Obelisk Movements were not disoriented with this other record. It had the same high quality rapping, punctuated by esoteric and abstract lyrics. It was obvious, though, that this one was a few years older than the other. The splendid "141 Million Miles", the contrebass heavy "Farward", the organ of "Every Devil" - to list a few of the best tracks - smelled like jazz-infused mid-90's classic rap. And the "So Deep Remix", a follow-up to their So Deep I Never Fell mixtape - from which they also recycled "Decapitation Free" – sounded even older with its vintage James Brown sample.

Return of the Travellahs belonged to indie rap's first phase, the purist, more than to second one, the futurist, the experimentalist. The duo's intentions were palpable as soon as with the minimalist "Slave", the first track, where this so-called slaves were in fact wack MCs leading rap to disaster, while I Self made sure his style enjoyed freedom. This was precisely about bringing hip-hop back to basics, as demonstrated by lyrics dedicated for a large part to boasting about the rapper's skills; as confirmed, as well, by omnipresent scratches, sometimes just background sounds, some others real solos. With Return of the Travellahs, the duo were back to the fundaments of hip-hop. And despite a less convincing second half, it worked well, laying a solid ground for the next records to come.