Despite his significant background, his key role in launching the Project Blowed, his membership to Haiku D'Etat, and even his featuring on a Grand Royal mixtape, it took a while for Abstract Rude to complete his first album, P.A.I.N.T.. He finally released this record in 2001 on Battle Axe Records; a record which, more than 10 years after, and in spite of some lengthy, soporific and weak r'n'b moments, is still the best in his solo discography. 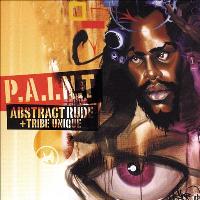 Released lately by a veteran, P.A.I.N.T. was somehow old sounding, with its smooth tone, its weed-infused feeling and its few women cooing. The man from the Good Life Café, one of the founding members of the Project Blowed, was now passed by younger, more audacious and more imaginative ones. Provided by Fat Jack, not exactly West Coast Underground's most inspired producer, his beats were not all outstanding.

This left us with Abstract Rude himself, with his deep voice, his clear and precise diction, his relaxed delivery, and his ability for freestyle prowess, Californians only are able to demonstrate (see "AB Live"). This left us also with some rich scratches, in particular those signed by DJ Rhettmatic; they woke the listener up, they added a pinch of salt and pepper to the most lethargic tracks. This left us, finally, with a handful of very great songs.

Not necessarily this "Dawning of the A.G.E." praised by many because of its original organ sample and the featuring of The Grouch and Eligh. No, not this one, but "Stop Biting", with its Wu-Tang-like minimalist piano; the harsh "Birds of a Feather", opposite to the smooth ambiance of the other tracks; "Frisbee", where Slug, Eyedea, Busdriver, 2Mex and LMNO successively shone, with support from Daddy Kev's beats and Rhettmatic's scratches; the splendid "She's Always Right" with Moka Only and Prevail, a report on some difficult love; the drum'n'bass and ethereal finale "A Coat of Paint"; and of course, the fourth round of the "Heavyweights" series, an episode featuring Volume 10, Busdriver, Nga Fish, Ellay Khule, Riddlore?, Medusa and the complete Freestyle Fellowship, among others, maybe the best in this collection of posse cuts scattered on several Project Blowed family records.

We can find all of this is on the long P.A.I.N.T., and much more. It can suit all tastes. And indeed, those who love this album never do it for the same reasons. This opulence and diversity is both the strength and the weakness of this record; an album that, like so many others in rap music, would have been a classic with a bit less fillers.