If Divine Styler has become a cult artist for fans of letfield hip-hop fans, this may be due less to his first album, the excellent Word Power, than to its follower, a quite experimental Spiral Walls Containing Autumns of Light. Released unexpectedly on a major label, at a time when those would sign any rapper, this record challenged radically hip-hop's usual frameworks. 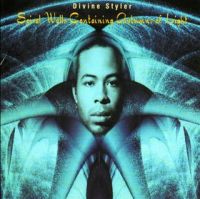 With Word Power, Divine Styler had already shown his interest in melting styles, exploring successfully reggae or house music on some tracks. These, however, were not that original. In the Golden Age's heyday, other rappers were trying similar things. And at the same time as Spiral Walls... was released, the rapper's main sponsor, Ice-T, was also crossing some borders with his metal project, Body Count. With this second album, however, produced this time entirely by him, Divine Styler was going much further.

Hip-hop was only there in bits and pieces, lost in multiple tracks that flirted with ambient music ("Am I an Epigram for Life", "Love, Lies and Lifetimes' Cries"), hardcore metal ("Mystic Sheep Drink Electric Tea"), some hippy's psych folk ("Width in My Depth") and à la The Cure cold wave, blended with dribbling guitars (the rather beautiful "Walk of Exodus"), or with other indefinable things, like the electronica mixed with some flute on "Grey Matter", the album's single, or the tribal drums, the guitar and the synthesizer of "Euphoric Rangers". Even raps were sharing space with other things like desperate shouts, whispers, howls, songs or, more often, spoken poetry. And the few "real" hip-hop tracks, the funky "Livery" for example, were enjoying the luxury, still rare at this time, of some full live instrumentation.

The significance of this UFO of a record was large, especially when considering that the guy here was not some White man playing with toys he had stolen from others, as usual when it comes to experimentation and crossover. As a bad boy from the ghetto who had found redemption in prison by converting himself to Islam, Divine Styler had a pure rapper story to share. Talking about religiousness, his record was full of this, with prayers to Allah ("Livery", "The Next", "Walk of Exodus", "Aura") and metaphysical reflections, or some tracks where he desperately knocked at heaven's door, imploring that someone lets him in ("Love, Lies and Lifetimes' Cries", "Heaven Don't Want Me, and Hell's Afraid I'll Take Over").

Even today, while some are thinking that Spiral Walls... was the work of a genius, some others are dubious. Its inner quality is still being debated. The essential, though, is not there. The essential is in these visionary moments, like the organ-sustained ramblings of "The Next", somehow heralding Mike Ladd's hallucinated spoken word, or this "Mystic Sheep Drink Electric Tea" that could have been recorded 20 years later by Death Grips. The essential was about transgression and opening doors, it was this license to do everything with hip-hop, absolutely everything, Divine Styler was delivering with this album.