Do you know Jimmy Greek? Most of the day, this Philadelphia resident was just a peaceful mailman. At night, however, he became the looniest MC who ever lived on Earth, belching crazy raps on similar minded beats produced by Rummage, a member, like himself, of the Jam Faction collective. This was years ago, and his releases got lost among the too many underground hip-hop records of this time. All over the 2000's, however, Greek proposed a series of noteworthy albums, including his very first, The Preferred Remedy. 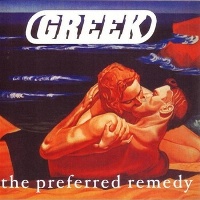 If rap's key principle is that you have to be a loudmouth to be great, Jimmy Greek stuck to its letter. His lyrics were declaimed at the top of his lungs, with a voice that always threatened to break. Seen from afar, it looked like nonsense, especially with this false interview in the first track that ended with the hook of Olivia Newton-John's "Physical"… However, through the record, we progressively got a better view of Greek's main character, some kind of magnificent loser, a man frustrated by a too normal life, but who wasn't afraid to bite; a castrated male, whose virility was contested by womens' behavior.

Ah, women… Greek had a grudge against them, no doubt. They made him bitter ("Bitter"). And to retaliate against a lost lover, he didn't hesitate to turn into a gigolo with a senator's wife, so that he gets his tax money back ("Bitter Turned Escort"). His view on marriage was pessimistic, but at the same time, he also mocked the usual machismo ("Masculine"). A definitively asocial guy, he claimed he was a nerd ("Demented Nerd") and he said good bye to love and relationships, preferring to them other forms of addictions: "my best friend is my dictionary, vocabulary is the name of my girlfriend"; was he shouting on "Different".

After the rather quiet funky loop of "The Perfect Storm", Rummage's beats proved to be cast in the same mould as the rapper's rants. It started getting rude with the rough rhythm and the minimalist beat of a "Starstruck" reminiscent of Company Flow; and then all completely blasted off with the horror movie-like broken melody of "Run the Gamit", its sci-fi noises and mad scratches, all adorned with the raving shouts of this nutcase of a rapper. Afterwards, the listener was flooded with the bass of the deliciously shaky "Bitter", the hair metal intro of "2 Sponges and a Can of Comet", suddenly interrupted by some basic boom bap. Then, Co-Flow was back again – "Population Control" was sampled twice, on "Different" and "Mealticket" – along with outer-space sounds ("Root Canal"), synthesizer and crowd noises on the excellent "Demented Nerd", and finally unhealthy violins on "Masculine".

On many tracks, "Different" and "Root Canal" for example, Jimmy Greek asserted that he was special, that he wanted to challenge wack MCs. He was making fun of rap's routines and this so-called "attitude" that was nothing but a cliché. And he was right doing so. Supported by Rummage's weird production, he was giving credence to some lyrics from El-P, that he inserted to his jumbling music: "I don't try to be different, I am".